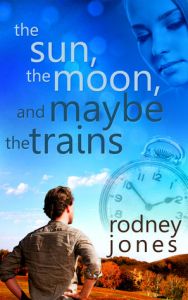 What would it take to convince you that the woods you just left is a hundred and forty-four years distant from the one you entered?

Ten years have passed since the Civil War broke up John Bartley’s family. Living with his aunt and uncle in the tiny village of Greendale, Vermont, isn’t filled with excitement for a seventeen-year-old.

Fortunately, he chances upon the outspoken Tess McKinnon. To earn her trust, he must first convince her that he is neither a lunatic nor a liar. The proof he needs is buried at the end of a mountain road, where the ruins of Greendale lie just beneath a layer of dead leaves and moss.

What became of his home? Why is there no record of its existence?

This book was unlike anything I have read before, an interesting mix of the historical and the contemporary.  The characters were so different from one another, the contrast keeping the dynamic between them interesting and often funny.  Their interaction truly showed the difference 134 years can make in a society.

John Bartley was a nice guy from 1875 Vermont.  Tess McKinnon is smart girl from 2009 Vermont.  The two should never have crossed paths, but when John somehow stumbles from his time into hers.  He is alone and confused, and more than a little scared by the new world he has found himself in.  I loved his character as the narrator, seeing the modern world through the eyes of someone like him.  The very things that we take for granted are amazing, and often shocking, to John.  Cars, phones, clothing, even the fact that Tess shaves her legs!  Tess is confronted with this guy and she wonders if he is a tad nuts in his conviction that he is from another time.  But eventually she comes to realize that he is not crazy at all.

I loved the interaction between them.  John, the quiet and reserved guy from a different time with different sociocultural values.  Tess, the modern and contemporary girl with modern values.  Their worlds are so different and sometimes those differences are a source of amusement or amazement, sometimes the source of judgment and misunderstanding.

There are some great moments in this book, moments of sadness and delight and fear and even some frustration.  There were some twists and turns and some good anticipation that kept me reading.  And the ending was a lovely bit of a cliffhanger that made me immediately reach for the next book, All the Butterflies in the World.  This was a great read unlike anything Ive read before!

All The Butterflies in the World

« All the Bright Places
City of Lost Souls »