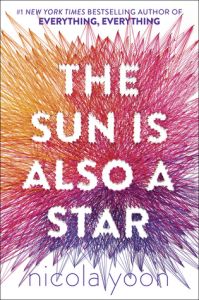 Natasha: I’m a girl who believes in science and facts. Not fate. Not destiny. Or dreams that will never come true. I’m definitely not the kind of girl who meets a cute boy on a crowded New York City street and falls in love with him. Not when my family is twelve hours away from being deported to Jamaica. Falling in love with him won’t be my story.

Daniel: I’ve always been the good son, the good student, living up to my parents’ high expectations. Never the poet. Or the dreamer. But when I see her, I forget about all that. Something about Natasha makes me think that fate has something much more extraordinary in store—for both of us.

The Universe: Every moment in our lives has brought us to this single moment. A million futures lie before us. Which one will come true?

The Sun is Also a Star is the second novel by Nicola Yoon and I loved it every bit as much as the first.  There was just something about this book that got to me.  And, in retrospect, this is surprising, because a big part of it centers around something I usually hate.  Instalove.  Instalove that takes place in a span of 24 hours.  But somehow, in this story and with these characters, it worked.

Natasha and Daniel are two very different people.  Natasha is wise beyond her years and highly intelligent.  She’s a practical soul that believes in science and facts, not love and fate.  She’s also an illegal immigrant that feels more at home in the US than in Jamaica, the country of her birth.  And she is just hours from being deported when she meets Daniel.  Daniel is the polar opposite to Natasha.  He is just as wise for his years, but he believes in fate and destiny.  He’s a poet and has a dreamer’s soul.  But he is first generation American in a Korean family.  And his family has very strict expectations for his future.  It’s a future he doesn’t want, but until Natasha, it is the only one he thought he had.  Yet the differences between them fall away over the course of a single day.

But The Sun is Also a Star is more than a book about love, even first love.  It’s a book about family and choices and fate.  It’s about finding your own way in the world, your own place.  Natasha is fighting to stay in the US, unhappy that she losing everything she loves and a future that is bright because of someone else’s mistake.  Her journey is about family and forgiveness, even acceptance.  But Daniel’s journey is different.  His is about living his own life in his own way, despite his family.  And meeting each other is a chance moment that changes both of them forever.

Nicola Yoon grew up in Jamaica (the island) and Brooklyn (part of Long Island). She currently resides in Los Angeles, CA with her husband and daughter, both of whom she loves beyond all reason. Everything, Everything is her first novel. 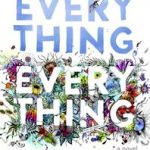 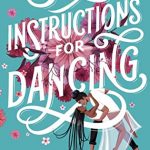