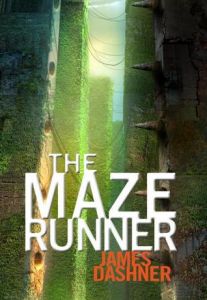 When Thomas wakes up in the lift, the only thing he can remember is his name. He’s surrounded by strangers—boys whose memories are also gone.

Nice to meet ya, shank. Welcome to the Glade.

Outside the towering stone walls that surround the Glade is a limitless, ever-changing maze. It’s the only way out—and no one’s ever made it through alive.

Everything is going to change.

Then a girl arrives. The first girl ever. And the message she delivers is terrifying.

This is one of the few books that I read AFTER seeing the movie, the movie making me want to read it when I previously had no interest.  And I loved it and the premise of the story.

The story opens with Thomas, locked in a metal box-like lift that is moving through the darkness.  He remembers nothing more about his life than his name, although he has flitting memories of other random knowledge with no connection to anything else.  When the Box finally stops, the ceiling doors open and he finds himself surrounded by strangers, boys like him with no memories of their lives before coming to the Glade.  Each of them has come to the Glade in the same mysterious way, in the Box with no memories beyond their names.  An enormous maze surrounds the Glade behind towering walls, inhabited by mysterious half-human/half-mechanical creatures called Grievers that usually only come out at night, but which are deadly.  Because of them, no one is allowed into the maze, with the exception of the Runners.  The Runners are Gladers assigned to run through it each day, mapping it and searching for a way through it.  From the beginning, Thomas is more curious than most, almost obsessed with finding a way out.  He becomes desperate to recover his lost memories and to find answers about the Glade and why they were all there.  There are moments throughout the book that underscore that Thomas is somehow different, somehow integral to the Glade and to the Maze and to whomever is behind it all, a mysterious group of people known as WICKED.

There is so much mystery surrounding the stroy and the boys living in the community of the Glade.  We know of WICKED, but very little about them, about who they are, what they are doing, why they are doing it.  That kind of mystery kept me on the edge of my seat, just wondering what was going to happen next in the story.

As much as I loved the book, there were a few things that I didn’t like.  One of these things I understand the purpose of, one I thought was unnecessary detail that just didn’t play well, and the third was not really a breaking point either way.  The first was the characterization of Teresa.  As the only girl in the group, for much of her story within the book, she was rather one-dimensional.  Most of the time, she seemed relegated to “pretty girl” status, rather than given a whole lot of strength and intelligence of her own.  If it was a purposeful choice by the author, rather than just my interpretation, then I understand it, even if I didn’t really like it.  It underscored the reality that she was the only girl and that the boys around her just weren’t sure how to feel about that.  The second thing I didn’t like was the use of invented slang among the boys, words like “shank” and “klunk” as a part of their language.  It felt too contrived and not natural.  For me, it took away from otherwise important moments and gave them a silly quality.  The last thing had to do with the telling, rather than showing, of the characters’ emotions.  We never really got into the characters’ heads, primarily Thomas, to feel what he was feeling.  Instead, we were told how it was feeling.  I am the type of reader that enjoys getting into the heads of the characters and being a part of the story and I didn’t have that nearly as much with this read.

However, none of these things were enough to turn me off of the series.  I loved the premise, the characters, and the mystery and anticipation of it.