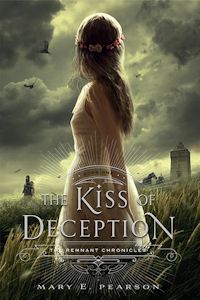 In this timeless new trilogy about love and sacrifice, a princess must find her place in a reborn world.

In a society steeped in tradition, Princess Lia’s life follows a preordained course. As First Daughter, she is expected to have the revered gift of sight—but she doesn’t—and she knows her parents are perpetrating a sham when they arrange her marriage to secure an alliance with a neighboring kingdom—to a prince she has never met.

On the morning of her wedding, Lia flees to a distant village. She settles into a new life, hopeful when two mysterious and handsome strangers arrive—and unaware that one is the jilted prince and the other an assassin sent to kill her. Deception abounds, and Lia finds herself on the brink of unlocking perilous secrets—even as she finds herself falling in love.

The Kiss of Deception is the first book in a new trilogy by Mary E. Pearson.  This is my first read by this author and I am a fan!  The story line is exciting and intriguing and the characters are fantastic.

Princess Lia is what royalty should be all about.  She is strong-willed and fierce, absolutely ready, willing, and able to buck tradition to avoid being forced into an arranged marriage to a prince she has never met.  Her best friend Pauline, and her handmaiden, runs with her, pure loyalty and friendship.  The two girls flee to a distant land and start over.  It is a life that is unlike that which they left behind, but for Lia, it is the happiest she has ever been.

This is a story about not only sacrifice and freedom, but about love and friendship and loyalty.  The first half of the book was very much like reading historical fiction.  But the second half became more of an epic fantasy read, quests and danger galore!  There is no end to the mystery and the intrigue and there are plot twists galore.  There are two mysterious men that appear in Lia’s life, men that keep you guessing right until the moment that things become clear.  There are so many levels of deception in this book, from the little ones conceived in a moment of the best of intentions to the huge ones that are life-altering!

Fantastic epic-like fantasy!  There is love and mystery and intrigue and danger and I highly recommend this read!

Mary E. Pearson is the award-winning author of The Jenna Fox Chronicles, The Miles Between, A Room on Lorelei, and Scribbler of Dreams. She writes full-time from her home office in California where she lives with her husband and two golden retrievers.

« The Bloodline War
All Our Pretty Songs »