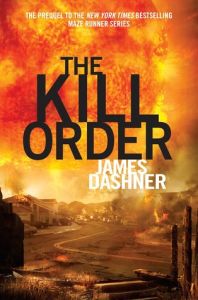 [color-box]Before WICKED was formed, before the Glade was built, before Thomas entered the Maze, sun flares hit the earth and mankind fell to disease.

Mark and Trina were there when it happened, and they survived. But surviving the sun flares was easy compared to what came next. Now a disease of rage and lunacy races across the eastern United States, and there’s something suspicious about its origin. Worse yet, it’s mutating, and all evidence suggests that it will bring humanity to its knees.

Mark and Trina are convinced there’s a way to save those left living from descending into madness. And they’re determined to find it—if they can stay alive. Because in this new, devastated world, every life has a price. And to some, you’re worth more dead than alive. [/color-box]

The Kill Order is the first prequel to The Maze Runner series, soon to be followed by The Fever Code.  This book takes place 13 years prior to the events of The Maze Runner and, although I have read many reviews that expressed disappointment because of the lack of connection between this book and the trilogy, but there is a connection.  It comes at the very beginning and at the very end, but it brings it all together. This provides some excellent backstory to The Maze Runner.

The story takes place long before the Maze and the Glade, even before WICKED came into being.  The majority of the story occurs after the sun flares have hit the earth, when groups of people have created new communities and have struggled to survive.  The story of the flares and the immediate aftermath is told through memories of the past, giving the reader a taste of the horror and chaos of the time, the struggle to survive not just the flares, but some of humanity’s worst.

Most of the story is centered around Mark, Alec, Trina, and Deedee, along with other members of their group.  They have struggled, but, with the others, they have created new lives for themselves.  Until the day that a government Berg (an aircraft) shows up and begins shooting darts at them, darts that seem to be filled with some kind of poison.  Once again, their lives are turned on edge and they are fighting to survive.

This is a book that shows humanity both at its best and at its worst.  There is madness and agony, pain and loss.  There are those who will do most anything in the name of the greater good, and those that see things differently and fight for their beliefs.

« Dropping Gloves
Warrior and the Wanderer »