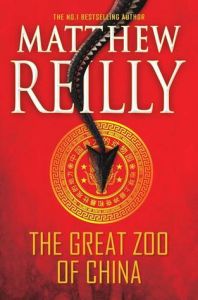 It is a secret the Chinese government has been keeping for forty years.

They have found a species of animal no one believed even existed. It will amaze the world.

Now the Chinese are ready to unveil their astonishing discovery within the greatest zoo ever constructed.

A small group of VIPs and journalists has been brought to the zoo deep within China to see its fabulous creatures for the first time.

Among them is Dr. Cassandra Jane ‘CJ’ Cameron, a writer for National Geographic and an expert on reptiles.

The visitors are assured by their Chinese hosts that they will be struck with wonder at these beasts, that they are perfectly safe, and that nothing can go wrong.

Of course it can’t…

I am honestly not sure how I feel about this book.  It is very reminiscent of Jurassic Park, just on a larger scale with much more intrigue and, if it is possible, more action.  The premise is fascinating, the lengths to which China would go in order to become a cultural superpower.  The prologue of the book is fascinating, and truly set the context for the rest of the novel.  While the novel is sci-fi/fantasy, the prologue’s tinge of reality created the framework, and believability, of the story.

The story is set in a zoo in southern China, a zoo like no other on earth.  Several VIPs from the fields of politics, science, and journalism have been invited to a special tour of the facility, a move to create global buzz in advance of its opening.  And, as one would expect, chaos ensues.

I love the premise of the book.  It is unique, despite its similarity to Jurassic Park, and the implications of it are astounding and rather horrifying.  To say that the novel is action-packed would be an understatement.  It was definitely on the gory side, which isn’t something I necessarily mind.  But there were times that the action was so intense that it was as if the human characters got a little lost.  We just didn’t get to know the individual characters very well and, although there was a large cast, very few were really developed.  And that made it a little hard to connect sometimes.

I think it was the lack of a lot of characterization that bothered me, but there is no denying that the premise is fantastic.  There are so many interesting elements to the story that make you think about what superpower status should really be worth.  It also makes you take a look at humanity and really wonder about it.  If you love thrillers with non-stop action and a good story line, this is a good read!

Matthew Reilly is a New York Times best-selling author of eight novels that have been published in eighteen languages in twenty countries. He has sold more than 3.5 million copies worldwide.