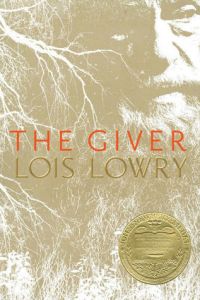 The Giver, the 1994 Newbery Medal winner, has become one of the most influential novels of our time. The haunting story centers on twelve-year-old Jonas, who lives in a seemingly ideal, if colorless, world of conformity and contentment. Not until he is given his life assignment as the Receiver of Memory does he begin to understand the dark, complex secrets behind his fragile community.

There is so much to love about this book, and so much that was deeply disturbing.  It is a world that, on the surface, seems as uptopian as one could imagine.  But is it really a utopia?  There are so many aspects to the world of The Giver that, for me, are as far from utopia as humanly possible.

Much of it was reminiscent of Huxley’s Brave New World.  Key parts of humanity have been stripped away.  Color, art, individuality, emotion.  Even child birth is more of a manufactured process that is dehumanized.  Social control is scary at best.  But these very disturbing things are exactly what make our main character Jonas so unique and instantly sympathetic.  This is a book about choices, about waking up and seeing things for what they truly are.  It is about determining your own future and deciding for yourself what is the most important.

I love a book that makes me think, that makes me question my own reality.  This is a book that does that.  It makes you question what aspects of humanity are truly important.  What would you be willing to sacrifice for a “better” world?  And what would a “better” world look like?  Is it worth lose wide emotional range that is an inherent part of humanity?  Is it worth losing a traditional family structure?

While this is technically a young adult novel, it has some rather deep themes that are just as intriguing to adults.  This is an engaging read for fans of utopian/dystopian worlds.

« This is Your Afterlife
Gathering Blue »