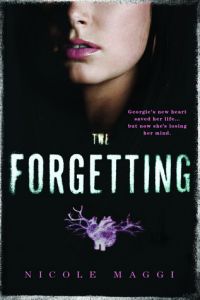 Georgie Kendrick wakes up after a heart transplant, but the organ beating in her chest doesn't seem to be in tune with the rest of her body. Why does she have a sudden urge for strawberries when she's been allergic for years? Why can't she remember last Christmas?

Driven to find her donor, Georgie discovers her heart belonged to a girl her own age who fell out of the foster care system and into a rough life on the streets. Everyone thinks she committed suicide, but Georgie is compelled to find the truth-before she loses herself completely.

The Forgetting was not a fluffy young adult novel, but a novel that looks at the very real issue of sex trafficking.  It is dark and often disturbing, but it is also beautiful with its moments of love and change.  Georgie has just had a heart transplant and she can’t help but feel like something is a just a bit off with her new heart.  It is as if the new heart still belongs to someone else and, at first, she doesn’t know what to make of that or what to do about it.  But she follows it’s guide, feeling as if she needs to find out what it is trying to tell her in order to get her own life back.  But the path the heart takes her is one that is dark and dangerous and it irrevocably changes her.

As Georgie goes deeper and deeper into the underworld of Boston, she sees things that she never knew existed in her sheltered world.  No matter how dangerous it may be, she cannot let things rest, cannot turn away from what she has seen and what she has learned.  One of the things I like best is that Georgie, when she acts impulsively, has enough self-awareness to know it and admit it, rather than be portrayed as a foolish girl.  I also like that she doesn’t try to do everything herself and knows when she needs help.

There are so many elements to this book… love, loss, friendship, change, growth.  In the course of Georgie’s search for answers, she meets Nate.  He is inextricably involved with her search and he opens her eyes to the reality of these young girls.  As Georgie learns more, she loses parts of herself in ways and for reasons that she never expected.  Her friendships change as she changes and there is a bit of a message about how deeply life-altering events can affect all aspects of your life.

The author does a great job of describing a world that most of us know exists, but tend not to see or consider.  These girls are forced into the sex trade, controlled and abused.  They are very young and they are used in unspeakable ways.  This is an eye-opening and thought-provoking book that I think is a must-read for girls and adults alike.

Nicole was born in the suburban farm country of upstate New York, and began writing at a very early age. Of course, her early works consisted mainly of poems about rainbows and unicorns, although one of them was good enough to win honorable mention in a national poetry contest! (Perhaps one of the judges was a ten-year-old girl.) Throughout high school, her creative writing was always nurtured and encouraged.

« Down from the Mountain
Soulprint »