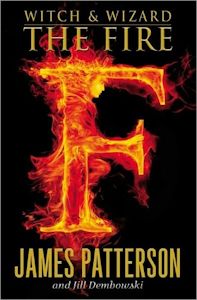 Whit and Wisty Allgood have sacrificed everything to lead the resistance against the merciless totalitarian regime that governs their world. Its supreme leader, The One Who Is The One, has banned everything they hold dear: books, music, art, and imagination. But the growing strength of the siblings' magic hasn't been enough to stop the One's evil rampage, and now he's executed the only family they had left.

Wisty knows that the time has finally come for her to face The One. But her fight and her fire only channel more power to this already invincible being. How can she and Whit possibly prepare for their imminent showdown with the ruthless villain that devastated their world-before he can truly become all-powerful?

In this stunning third installment of the epic Witch & Wizard series, the stakes have never been higher--and the consequences will change everything.

I have enjoyed this series, told from the alternating points of view of Wisty and Whit.  The two are leading the Resistance against The One Who is The One and the bleak  world that he and his regime have created.  Just about everything that is beautiful and soul-stirring has been stripped away… books, art, music, any kind of creative expression.

I love the story line behind the series, the idea that it is kids that have to save the world. This book lacked a little for me, though.  It doesn’t seem like a lot of progress was made in the quest to end the reign of the one.  Whit and Wisty spent much of their time apart and the Resistance is missing, and I can’t help but wonder if that missing dynamic was part of it.  There also seemed to be too much missing between the end of the second book and the beginning of this one.  Neither Whit nor Wisty have made a lot of headway with learning how to use their powers and that has kind of slowed the pace of the story.

All of that being said, I did enjoy the story.  It just wasn’t my favorite of the series thus far.  The series isn’t over, with the next book already out and a fifth due out later this year.

Even if it wasn’t my favorite, it is important to the series and necessary to build upon the world of Witch & Wizard.