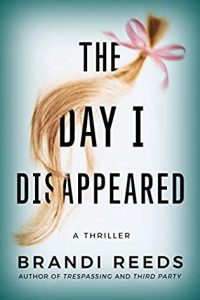 A terrifying crime reunites a mother and daughter in a novel of psychological suspense by the Amazon Charts bestselling author of Trespassing.
Three months after four-year-old Holly Gebhardt was kidnapped, she was inexplicably returned to the same park from which she’d vanished…with no memory of the ordeal. Though a local handyman was convicted, suspicion also fell on his friend—Holly’s mother, Cecily. The troubling doubts about her involvement shattered the family, forever driving a wedge between mother and daughter.
Twenty years later, another girl goes missing under eerily similar circumstances. It’s just the latest in a series of kidnappings that Detective Jason Guidry thinks Holly can help solve. Though Holly has tried to move on with her life, a young girl’s life hangs in the balance. All she has to do is try to remember…
With her memory still mostly blank, Holly is missing vital pieces of the puzzle, and she believes her mother can put them in place. In desperation and fear, Holly and her mother come together again. But in a chilling rush toward the past, Cecily still has secrets she’s yet to share with her daughter. Should she dare to breathe a word, she could lose Holly all over again.

From the moment I picked this book up, I couldn’t put it down! The story was so compelling, the characters so interesting. I love a thriller that takes you on a journey, and this one did exactly that.

The book alternates between two POVs, that of Holly and that of her mother. Holly was kidnapped at a young age, gone for a little more than three months before being returned relatively unscathed. Her mother, Cecily, narrates her part through her thoughts as she lies in a coma after an accident.

What makes this story so intriguing is that neither narrator is entirely reliable. Holly’s memories are almost nil, just bits and pieces and shards of visions that may or may not be real. And Cecily is an alcoholic in a coma whose memories may or may not be altered from years of abusing alcohol.

The story is given in bits and pieces, with hints and implications that keep the reader hooked. My favorite thrillers do exactly that, keep me dangling on the hook, wondering time and time again where the story is going. There were so many times that I was certain I’d picked out the bad guy, only to discover I was completely wrong.

However, there was one character that I just detested, and she wasn’t even the villain of the story. Kitten, Holly’s best friend, who’d been with Holly in the park the day she’d been abducted. She was just thoroughly unlikable. She was arrogant and condescending, a bridezilla to the point of insanity. She was the queen of making everything all about her, even Holly’s abduction. She was the least supportive best friend I’ve ever seen. The skeptical best friend was a great counterpoint to Holly and good for the story, but I just thought she was a little too much.

If you love twisty mysteries and intriguing thrillers, this is a fantastic read!

Brandi Reeds is a critically acclaimed author who writes young adult novels under the pseudonym Sasha Dawn. Her debut psychological thriller, Oblivion, was chosen as one of the New York Public Library’s Best Books for Teens, recommended by the School Library Journal, endorsed by the American Library Association, and selected by the 2016 Illinois Reading Council as a featured book.

On her way to becoming an author, Reeds earned her BA in history and English from Northern Illinois University, followed by an MA in writing from Seton Hill University. When not working on her next book, she teaches college English and works as a kitchen design consultant and cabinetry specialist. She’s also an avid traveler, reader, and dance enthusiast.

Reeds is a Chicago native (Go, White Sox!) and currently lives in the northern suburbs with her husband, daughters, and three puppies.

« In Your Hands Blog Tour
Murder on the Mountain Blog Tour »