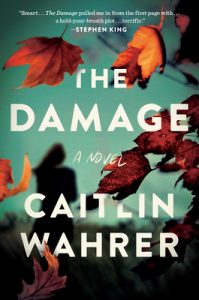 When a small-town family is pushed to the brink, how far will they go to protect one of their own? An edgy, propulsive read about what we will do in the name of love and blood
Tony has always looked out for his younger brother, Nick. So when he's called to a hospital bed where Nick is lying battered and bruised after a violent sexual assault, his protective instincts flare, and a white-hot rage begins to build.
As a small-town New England lawyer, Tony's wife, Julia, has cases involving kids all the time. When Detective Rice gets assigned to this one, Julia feels they're in good hands. Especially because she senses that Rice, too, understands how things can quickly get complicated. Very complicated.
After all, one moment Nick was having a drink with a handsome stranger; the next, he was at the center of an investigation threatening to tear not only him, but his entire family, apart. And now his attacker, out on bail, is disputing Nick's version of what happened.
As Julia tries to help her brother-in-law, she sees Tony's desire for revenge, to fix things for Nick, getting out of control. Tony is starting to scare her. And before long, she finds herself asking: does she really know what her husband is capable of? Or of what she herself is?
Exploring elements of doubt, tragedy, suspense, and justice, The Damage is an all-consuming read that marks the explosive debut of an extraordinary new writer.

The Damage was a tough book to read, focused on a sexual assault and the aftermath. Books about sexual assault aren’t a new thing, but what makes this particular book stand out was that it was about a male sexual assault, a topic that’s vastly underrepresented in fiction. Also interesting was that the story explored sexual assault’s impact not just on the victim but also on his entire family. In many ways, it was more their story than his.

The crime against Nick was brutal, and he was an endearing character, his pain often difficult to read. That pain extended to his family, too. His brother Tony struggled, wanting to find a way to fix everything for his younger brother, frustrated when he couldn’t. Julia, Nick’s sister-in-law, fought on two fronts. One, to keep her husband’s need for revenge in check. And two, to help Nick find his way through the darkest time of his life.

The story is told through two timelines, that of the present and that of the past, when the crime took place. It is also told from four perspectives, those of Julia, Tony, Nick, and the detective who’d investigated the crime. It sounds complicated to follow, but it isn’t. The voices are very distinct, making it easy to keep track of who is who, and when. However, it felt as if, although there were four perspectives, only Julia’s and Nick’s really allowed the reader to get to know them, the others more superficial.

Although there is a mystery element to the book, it felt as if that was less important to the story than the exploration of the issues of sexual assault and mental health, as well as the quandries of morality.

Sexual assault can be difficult topic in fiction, in how it’s used to move the story forward. Sometimes it’s a valid part of the storyline; other time it feels like it’s being used as an emotionally manipulative device. For me, The Damage bordered the latter. There was a thread of the “is the victim telling the truth” that felt manipulative for the reader and trusting Nick. Casting doubt on the credibility of the victim is an overused trope, and it felt even more manipulative when his full story was revealed, and it just wasn’t that big a deal. Even that it was a sexual assault against a man felt a little manipulative to me. There was little discussion of that outside of how it affected other people, the feelings that the assault of a male would engender in others. Most particularly, a straight man. In this case, his brother, which neatly leads to a revenge plotline that felt contrived.

Caitlin is a Maine girl through and through. She was born to two hippies who raised her in a small town in central-southern Maine without a single stoplight in it. Caitlin left the state for four years to study criminal justice and marriage and family studies at a college in Pennsylvania. She returned to Maine after graduation to attend law school and practice law. She and her husband live in southern Maine with their dog.