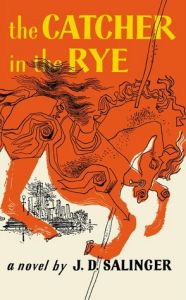 Since his debut in 1951 as The Catcher in the Rye, Holden Caulfield has been synonymous with "cynical adolescent." Holden narrates the story of a couple of days in his sixteen-year-old life, just after he's been expelled from prep school, in a slang that sounds edgy even today and keeps this novel on banned book lists. It begins,
"If you really want to hear about it, the first thing you'll probably want to know is where I was born and what my lousy childhood was like, and how my parents were occupied and all before they had me, and all that David Copperfield kind of crap, but I don't feel like going into it, if you want to know the truth. In the first place, that stuff bores me, and in the second place, my parents would have about two hemorrhages apiece if I told anything pretty personal about them."

His constant wry observations about what he encounters, from teachers to phonies (the two of course are not mutually exclusive) capture the essence of the eternal teenage experience of alienation.

I picked up this book for the Eclectic Reader Challenge and it ended up doing double duty as a read for a module on censorship and banning in a lit class I am taking this semester.  It is one of those “Life List” books that I never read in high school but felt like I should.

The novel is a Holden Caulfield’s narrative of two days that he spends on his own in New York City.  He has been expelled from yet another prep school, failing every subject but one.  After a fight with his roommate, he leaves school a few days early and goes back to New York City.  However, he knows that his parents will be furious about what happened and he chooses to spend a few days alone in a hotel before presenting himself at home for the holidays.  His two-day rebellion is spent going to nightclubs and getting drunk or wandering the city, continually bemoaning the lack of intellectual companionship.  He has a date with Sally, a girl from his past, and alternately falls in love with her and hates her… all on the same date.  He is a boy who is clearly never satisfied with anyone or anything, continually in a state of discontent.  His short time of rebellion has brought him no answers and no relief.

I really wanted to love this book, or at least appreciate it, but I just couldn’t.  It wasn’t the dated language or ideas, but the complete lack of a character arc for Holden.  With most protagonists, there is a certain arc of growth that takes place as the character goes through different experiences and situations and becomes changed as a person by the story’s end.  This really didn’t happen with Holden and that lack of character growth is something that I came to realize I really appreciate in a novel and really missed in this one.  Holden is intelligent, but comes across as a bit arrogant, perhaps a little too obsessed with himself as a barometer of intellect.  For most of the book, Holden dismisses others as “phony” and casts aspersions on their worth if they don’t live up to the personal standards he expects, standards that generally seem not to apply to himself.  Instead of relating to Holden’s character, I found myself continually annoyed by him and his seemingly complete lack of self-awareness.  There was just no growth for Holden over the course of the novel, no change in behavior or thinking, no development.  Other than his little sister, Holden seems to struggle to truly connect with anyone on any level.  He spends most of the book whining about the fact that pretty much every person he meets is unintelligent and/or phony.  He sees himself as intellectually superior to most people, judging others as phony for their interest in things he sees as inconsequential.

There is also much about his burgeoning sexuality and how that manifests itself, but there is never any development or resolution to that theme either.  It seems as if he is not entirely comfortable with his own sexual awakening, often commenting about his myriad of chances to lose his virginity that are foiled by himself.  He often objectifies women, but it is also clear that there is little behind it, more of an effort to fit in with the other guys in his school, rather than an accurate representation of his true feelings.  This is seen in his almost obsessive anger towards his roommate when he finds out that Stradlater’s date is Jane, a girl from Holden’s past.  He cannot stand the idea that Stradlater, a guy with a somewhat sketchy sexual history with women, would be with Jane, whom Holden seems to see as some sort of “above it all” standard of perfection.  His thoughts on sexuality seem to be rather disjointed, one moment bemoaning his lack of experience and the next almost frightened by it.  He does not push the issue with his dates and even during an encounter with a prostitute, he rebuffs the idea of intimacy, instead wanting simply to talk.  In keeping with his rather disjointed ideas are his judgments on others’ sexuality, often seeing others “perverted.”  There are also many moments when he questions the sexual orientation of those around him, showing a certain discomfort with the entire topic of sexuality.

In some ways, though, iit was an interesting read.  The story is told as it flows from Holden’s mind, at times very much of a stream of consciousness feel to it.  The flow was often a bit disjointed and almost reminded me of the flow of Anthony Swofford’s Jarhead book.  But it is through this perspective and style of writing that we become privvy to the inner workings of Holden’s mind.  Yet, as the story unfolded, I still liked it less and less.

Classic literature or not, it just didn’t appeal to me.  But I also think that is a matter of “to each his own.”  From a analytical standpoint, it was an interesting read, but it just didnt touch me in any way.

Jerome David Salinger was an American author, best known for his 1951 novel The Catcher in the Rye, as well as his reclusive nature. His last original published work was in 1965; he gave his last interview in 1980. Raised in Manhattan, Salinger began writing short stories while in secondary school, and published several stories in the early 1940s before serving in World War II. In 1948 he published the critically acclaimed story “A Perfect Day for Bananafish” in The New Yorker magazine, which became home to much of his subsequent work. In 1951 Salinger released his novel The Catcher in the Rye, an immediate popular success. His depiction of adolescent alienation and loss of innocence in the protagonist Holden Caulfield was influential, especially among adolescent readers. The novel remains widely read and controversial, selling around 250,000 copies a year.

The success of The Catcher in the Rye led to public attention and scrutiny: Salinger became reclusive, publishing new work less frequently. He followed Catcher with a short story collection, Nine Stories (1953), a collection of a novella and a short story, Franny and Zooey (1961), and a collection of two novellas, Raise High the Roof Beam, Carpenters and Seymour: An Introduction (1963). His last published work, a novella entitled “Hapworth 16, 1924”, appeared in The New Yorker on June 19, 1965.

Afterward, Salinger struggled with unwanted attention, including a legal battle in the 1980s with biographer Ian Hamilton and the release in the late 1990s of memoirs written by two people close to him: Joyce Maynard, an ex-lover; and Margaret Salinger, his daughter. In 1996, a small publisher announced a deal with Salinger to publish “Hapworth 16, 1924” in book form, but amid the ensuing publicity, the release was indefinitely delayed. He made headlines around the globe in June 2009, after filing a lawsuit against another writer for copyright infringement resulting from that writer’s use of one of Salinger’s characters from The Catcher in the Rye. Salinger died of natural causes on January 27, 2010, at his home in Cornish, New Hampshire.

« February Wrap-Up
Down from the Mountain »