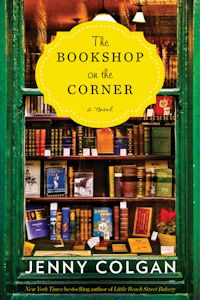 [color-box]“Losing myself in Jenny Colgan’s beautiful pages is the most delicious, comforting, satisfying treat I have had in ages.”—Jane Green, New York Times bestselling author of Summer Secrets

Nina Redmond is a librarian with a gift for finding the perfect book for her readers. But can she write her own happy-ever-after? In this valentine to readers, librarians, and book-lovers the world over, the New York Times-bestselling author of Little Beach Street Bakery returns with a funny, moving new novel for fans of Meg Donohue, Sophie Kinsella, and Nina George’s The Little Paris Bookshop.

Nina Redmond is a literary matchmaker. Pairing a reader with that perfect book is her passion… and also her job. Or at least it was. Until yesterday, she was a librarian in the hectic city. But now the job she loved is no more.
Determined to make a new life for herself, Nina moves to a sleepy village many miles away. There she buys a van and transforms it into a bookmobile—a mobile bookshop that she drives from neighborhood to neighborhood, changing one life after another with the power of storytelling.

From helping her grumpy landlord deliver a lamb, to sharing picnics with a charming train conductor who serenades her with poetry, Nina discovers there’s plenty of adventure, magic, and soul in a place that’s beginning to feel like home… a place where she just might be able to write her own happy ending.[/color-box]

I don’t read a lot of contemporary romance, but every now and then, one grabs me and won’t let go.  This was one of those novels and it was an impulse buy that I am extremely glad I made.  I was initially taken by the cover as it sat on the shelf in my local PX.  I had time to kill and no book with me, so I picked it up and settled into Starbucks and was immediately lost.  In the foreword.  Yes, the foreword.  It was smart and funny and it set the tone for the whole novel.

The novel is set in the United Kingdom, first Britain and then Scotland.  I’m from northern New York and living in Hawaii, but I felt like I was transported to the Highlands of Scotland.  Colgan’s writing is so perfectly descriptive that I saw everything Nina saw.  It made me feel as if I were a participant in the story, rather than a far off observer.

Nina is a librarian who is forced to find a new way to make a living when her library closes to consolidate with another in a cost-saving measure.  She is left not only without a job, but feeling as if the printed word was a dying breed.  But it is enough of an impetus to make her throw caution to the wind and follow her dreams of owning her own little bookshop.  But, as is the trend in her life presently, none of her plans go through as they were supposed to and her life moves in totally different directions.  That theme, the idea of life throwing you a curve, is something I think that all readers can relate to on some level.  The idea of having to uproot everything you’ve known and find a new identity… ideas that are scary for all of us.  But that is what Nina does and it’s a story that is truly engaging.

And the romance… that is something rather new for Nina, something she is not entirely comfortable with.  And all of a sudden, there is more than one man in her life.  Her former coworker Griffin confesses to his interest in her, which, although she doesn’t return it, gives her a spark of confidence.  Then there is Marek, the exotic Soviet train worker she meets in the middle of the most unexpected moment.  Their romance blossoms, a sweet romance that shows promise.  And then there is Lennox, her surly (but gorgeous) landlord with a trainload of baggage of his own.  The twists and turns her love story takes are just as engaging as the rest of the story.

One of my favorite parts of the book, beyond the overflow of book love, was a subplot involving a teenage girl.  That story is poignant and tugs at the heartstrings in so many ways.

I think the most eye opening moment for Nina, which really hit me, was a a moment when she is driving down the main street of her new home and sees just about everyone in sight reading.  That scene was everything that I believe to be true about books and it was a great bit!

Jenny T. Colgan was born in 1972 in Prestwick, Ayrshire, Scotland, UK. After studying at Edinburgh University, she worked for six years in the health service, moonlighting as a cartoonist and a stand-up comic, before the publication of her first novel Amanda’s Wedding in 2000. In 2013, her novel “Welcome to Rosie Hopkin’s Sweetshop of Dreams” won the Romantic Novel of the Year Award by the Romantic Novelists’ Association. She is now working on her next novel.

She mostly lives in France, with frequent visits to London. She occasionally writes for The Guardian newspaper, as well as a TV series.

Her Doctor Who novel Dark Horizons is published under the name Jenny T. Colgan.