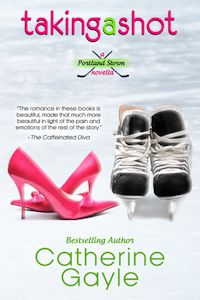 Katie Weber has lost her health due to leukemia, and now her chemotherapy treatments have taken her hair. She’s not about to show up to her senior prom bald and let her classmates steal her dignity, too. Prom is no place for a girl who looks more like an alien than a high school student, especially when her so-called friends all dropped her like she had the plague at the first mention of the word cancer. Katie could never get up the courage to ask Jamie—her crush for almost two years, ever since he joined her dad’s pro hockey team—to take her. Not with the way she looks now. Besides, her dad would absolutely murder him.

Jamie Babcock knows its bad news to fall for his Portland Storm teammate’s daughter, but he’s had a thing for Katie since the first time he met her when he was just a wide-eyed, eighteen-year-old rookie. Now cancer might take her away before he ever grows the balls to do anything about it, though. Her father won’t be happy about it, but Jamie has to take a shot and ask to take her to her prom. It seems like Katie has just about given up, and he can’t let her go without giving her some good memories…something to hold on to. She’s still got her whole life ahead of her—she just has to keep living it. If he can convince her of that, nothing her father might do to him will matter.

This is the book/novella I have been waiting for!  This is the story of Jamie/Babs and Katie, two of the characters that I fell in love with in the second book, On the Fly.  I love these books for so many reasons… hockey, romance, and real issues and emotions.  This one is no different.

Even as short as it might be, there is so much emotion packed into it.  Katie’s story alone is heart wrenchingly poignant and cry-worthy.  Jamie is everything I could ever want in a Book Boyfriend.  He is kind and caring and completely grounded in the important things.

I absolutely love this storyline and I am thrilled that they will be back in April 2015 in Dropping Gloves, Book #7 in this great series!

This is technically Book #2.5, but it can really be read any time after On the Fly and before Double Major.  It is a fantastic addition to the story!