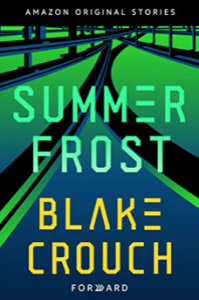 A video game developer becomes obsessed with a willful character in her new project, in a mind-bending exploration of what it means to be human by the New York Times bestselling author of Recursion.
Maxine was made to do one thing: die. Except the minor non-player character in the world Riley is building makes her own impossible decision—veering wildly off course and exploring the boundaries of the map. When the curious Riley extracts her code for closer examination, an emotional relationship develops between them. Soon Riley has all new plans for her spontaneous AI, including bringing Max into the real world. But what if Max has real-world plans of her own?
Blake Crouch’s Summer Frost is part of Forward, a collection of six stories of the near and far future from out-of-this-world authors. Each piece can be read or listened to in a single thought-provoking sitting.

Blake Crouch is a bestselling novelist and screenwriter. He is the author of the forthcoming novel, Dark Matter, for which he is writing the screenplay for Sony Pictures. His international-bestselling Wayward Pines trilogy was adapted into a television series for FOX, executive produced by M. Night Shyamalan, that was Summer 2015’s #1 show. With Chad Hodge, Crouch also created Good Behavior, the TNT television show starring Michelle Dockery based on his Letty Dobesh novellas. He has written more than a dozen novels that have been translated into over thirty languages and his short fiction has appeared in numerous publications including Ellery Queen and Alfred Hitchcock Mystery Magazine. Crouch lives in Colorado with his family.