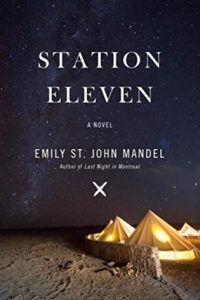 An audacious, darkly glittering novel about art, fame and ambition set in the eerie days of civilization's collapse, from the author of three highly acclaimed previous novels.

One snowy night a famous Hollywood actor slumps over and dies onstage during a production of King Lear. Hours later, the world as we know it begins to dissolve. Moving back and forth in time-from the actor's early days as a film star to fifteen years in the future, when a theatre troupe known as the Travelling Symphony roams the wasteland of what remains-this suspenseful, elegiac, spellbinding novel charts the strange twists of fate that connect five people: the actor, the man who tried to save him, the actor's first wife, his oldest friend, and a young actress with the Traveling Symphony, caught in the crosshairs of a dangerous self-proclaimed prophet. Sometimes terrifying, sometimes tender, Station Eleven tells a story about the relationships that sustain us, the ephemeral nature of fame and the beauty of the world as we know it.

Because of COVID, reading Station Eleven now, as opposed to when it was first published in 2014, probably created a very different reading experience. It’s impossible to read without drawing parallels between the world of the book and the world we live in right now. In Station Eleven, the Georgia Virus has caused the total collapse of human civilization as we know it, an extreme version of what we are now facing. The pandemic we are living through right now made the story of the book that much more imaginable.

The book opens just hours before the virus begins to spread across the world. Arthur, an actor, collapses during a production of King Lear. Much of the story takes place in the present, some fifteen years after the virus changed the world. The rest of it is told through flashbacks to the early days of the pandemic and even earlier, through the eyes of Arthur and four others who are connected to him, and to each other in bizarre twists of fate. The back and forth truly underlines just how much the world has changed in the aftermath of the virus. Now the world bears little resemblance to the “civilized” environment of days gone by. Instead, it’s a world that has been decimated, and those that are left have formed into scattered communities. The Traveling Symphony have spent years as nomads, going from community to community around the Great Lakes in an effort to keep the idea of art alive.

The writing is very good, the language descriptive. The postapocalyptic world, at times, is reminiscent of the bleakness of Atlanta in The Walking Dead. The highway with its miles of eternal gridlock, the signs of the earth taking back the abandoned wreckage of a world that is no more. But the tone is much quieter without the chaos of that postapocalyptic event.

The book kept me turning the pages. There were moments when I just couldn’t put it down. But I still have rather complicated feelings about it. The book, in the beginning, was very focused on Jeevan. Yet there was comparatively little about him throughout the rest of the book. There was a bit near the end that felt more like a “ticking of the box” to wrap up his story than any real conclusion to it. And the prophet… There was nothing about how he came to be as he was, and I feel like that was an opportunity missed. I think it was something that really needed to be explored. There was also a section that had a very different vibe than the rest of the book, a bit of the supernatural, which was jarring. It didn’t seem to fit. Later, I ran across the author answering a question about it on Goodreads. Her answer… she really just wanted to write a ghost story. So I feel justified in feeling like it was out of place.

And the most complicated feeling… I felt like there was little in the way of character arcs for any of them. Generally, I detest a novel without a good character arc. (I’m looking at you, The Catcher in the Rye.) But somehow, it didn’t matter with this book. I enjoyed it anyway!!

Emily St. John Mandel was born and raised on the west coast of British Columbia, Canada. She studied contemporary dance at the School of Toronto Dance Theatre and lived briefly in Montreal before relocating to New York.

She is the author of five novels, including The Glass Hotel (spring 2020) and Station Eleven (2014.) Station Eleven was a finalist for a National Book Award and the PEN/Faulkner Award, won the Morning News Tournament of Books, and has been translated into 34 languages. She lives in NYC with her husband and daughter.

« The Wife Upstairs
The Wish Collector »