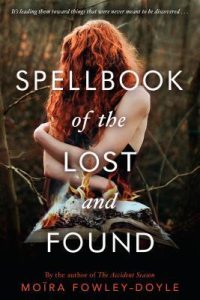 One stormy Irish summer night, Olive and her best friend, Rose, begin to lose things. It starts with simple items like hairclips and jewelry, but soon it's clear that Rose has lost something much bigger, something she won't talk about, and Olive thinks her best friend is slipping away.

Then seductive diary pages written by a girl named Laurel begin to appear all over town. And Olive meets three mysterious strangers: Ivy, Hazel, and her twin brother, Rowan, secretly squatting in an abandoned housing estate. The trio are wild and alluring, but they seem lost too--and like Rose, they're holding tight to painful secrets.
When they discover the spellbook, it changes everything. Damp, tattered and ancient, it's full of hand-inked charms to conjure back things that have been lost. And it just might be their chance to find what they each need to set everything back to rights.

Unless it's leading them toward things that were never meant to be found...

This book truly captured the mood and tone of what magical realism should be. It is both haunting and beautiful, both hopeful and dark. The lines between what is real and what is otherworldy are perfectly blurred. And the writing is lush and lyrical, pulling the reader into the story. The narrative was so creative, with an almost abstract quality to it. Nothing is solid or stable. No one is reliable. Nothing can be trusted. The story wavers as you read it, shifting between the real and the magical.

The premise was so interesting and unique, told through multiple perspectives and timelines which come together in a surprising way. Things are being lost, and at first, few think much of it. Sometimes, it’s small, inconsequential things. Other times, the things being lost are less tangible but more significant. At the same time, things are also being found… both tangible and intangible. It’s a story that asks questions, of the characters and of the reader. Are the consequences of what you gain worth what you lost? How much can you lose before you lose yourself?

I love the LGBTQIA+ representation. There are two bisexual girls and one lesbian, none of which are all that prevalent in YA lit. Was there a little bit of insta love between two of the girls? Yes, maybe. But I don’t count that as an anti-bonus point because that is often just a part of life for teenagers.

One of my favorite things was that the author firmly removed the pedestal upon which female virginity is placed. Virginity wasn’t painted as some kind of precious gift; it wasn’t used as a measure of a girl’s worth. I loved the empowerment of that.

I didn’t altogether love the way rape and sexual harasment was treated. It felt as if it wasn’t given the significance that kind of trauma deserves, touched on very superficially. There was little exploration of how it really affected the character, and the way the offender was handled seemed a touch lazy. Nor was there any real conclusion to that part of the plot. It seemed as if the whole thing was just used as a device to give that character purpose in the main plot of the story.

Maybe every first is a loss.

Maybe we need to lose some things to make room for others. The everyday things we let go of so we can move on with a lighter load.

A few other otherworldly magical realism novels for you!

Moïra Fowley-Doyle is half-French, half-Irish and lives in Dublin with her husband, their young daughter and their old cat. Moïra’s French half likes red wine and dark books in which everybody dies. Her Irish half likes tea and happy endings.

Moïra spent several years at university studying vampires in young adult fiction before concentrating on writing young adult fiction with no vampires in it whatsoever. She wrote her first novel at the age of eight, when she was told that if she wrote a story about spiders she wouldn’t be afraid of them any more. Moïra is still afraid of spiders, but has never stopped writing stories. 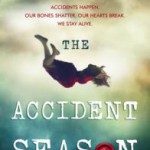