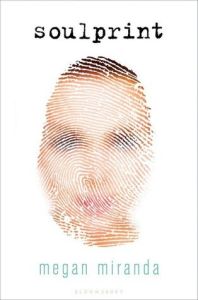 Alina Chase has been contained on an island for the last 17 years—whether that’s for the crimes of her past life, or for her own protection, well, that depends on whom you ask. With soul-fingerprinting a reality, science can now screen for the soul, and everyone knows that Alina’s soul had once belonged to notorious criminal, June Calahan, though that information is supposed to be private. June had accomplished the impossible: hacking into the soul-database, ruining countless lives in the process.

Now, there are whispers that June has left something behind for her next life—something that would allow Alina to access the information in the soul-database again. A way to finish the crimes she started.

Aided by three people with their own secret motivations, Alina escapes, only to discover that she may have just traded one prison for another. And there are clues. Clues only Alina can see and decipher, clues that make it apparent that June is leading her to something. While everyone believes Alina is trying to continue in June’s footsteps, Alina believes June is trying to show her something more. Something bigger. Something that gets at the heart of who they all are—about the past and the present. Something about the nature of their souls.

Alina doesn’t know who to trust, or what June intends for her to know, and the closer she gets to the answers, the more she wonders who June was, who she is, whether she’s destined to repeat the past, whether there are truths best kept hidden—and what one life is really worth.

Soulprint is a new sci-fi/thriller novel with an extremely fascinating premise.  It looks at the soul in an interesting way, looking at it from social and scientific viewpoints, rather than as a part of any particular spirituality.  It takes place in a world in which science has advanced to the point of being able to soulprint, much like fingerprinting.  The social ramifications of that ability are at the center of this book and the protagonist, Alina Chase.

Alina is not imprisoned, but “contained,” solely on the basis of her soul having previously belonged to a woman that was considered to be an extremely dangerous criminal.  The science and thought behind soulprinting was that the soul remains unchanged from life to life, leaving one predisposed to certain behaviors.  Because of that belief and the depth of the criminality that her soul has supposedly possessed, Alina has lived almost her entire life isolated on an island, surrounded only by an ever rotating staff of people that take care of her without ever truly caring for her.  And then things change and she has been broken out of her prison?  But for what reason?  And is her new life any less a prison?

This is a fast-pased thriller with so many twists and turns as Alina, and those who broke her free, explore her past to find answers.  Her character is one I truly loved.  She is smart, strong, and determined, unwilling to meekly follow others without finding answers for herself.  The author leaves bread crumbs for readers, bits and pieces of the mystery that allow the reader to guess at different parts of it without giing it all away.  It was a great way to build anticipation along the way.

Alina never really believed that her soul’s previous incarnation meant that she, too, would be a criminal.  But as her path to discovering more led her to question that and wonder if perhaps the soulprinter advocates were correct in their theory.  The story was as much one of growth and change for Alina as it was a sci-fi thriller.

I loved that the book looked at the idea of souls, and reincarnation, from a point of view that was not religious.  It was a nice twist to look at it from such a different perspective and it made for a interesting read.  I would definitely recommend this for sci-fi and thriller lovers alike!

Megan Miranda is the author of the young adult novels Fracture, Hysteria, Vengeance, and Soulprint (all from Bloomsbury). Her debut adult suspense novel, Disappear, will be published by Simon & Schuster in 2016. Megan has a degree in Biology from MIT and currently lives near Charlotte, North Carolina with her husband and two children.

« The Forgetting
Of Fire and Ash »