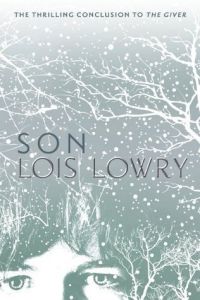 They called her Water Claire. When she washed up on their shore, no one knew that she came from a society where emotions and colors didn’t exist. That she had become a Vessel at age thirteen. That she had carried a Product at age fourteen. That it had been stolen from her body. Claire had a son. But what became of him she never knew. What was his name? Was he even alive?  She was supposed to forget him, but that was impossible. Now Claire will stop at nothing to find her child, even if it means making an unimaginable sacrifice.

Son thrusts readers once again into the chilling world of the Newbery Medal winning book, The Giver, as well as Gathering Blue and Messengerwhere a new hero emerges. In this thrilling series finale, the startling and long-awaited conclusion to Lois Lowry’s epic tale culminates in a final clash between good and evil.

Son is the final book in the series and, as much as I enjoyed this series, this book left me with mixed feelings.  There were new characters and old, which led to both new story lines and resolutions to existing ones.  But some of the messages in this one struck me as a little off.

This book is split into three sections, following several years in the life of Claire.  The first part takes us back to places we have been before, going back in time a bit to about the time when Jonas’ story began.  As a mother, her story in this section touched me, heart and soul.  The second part of the story takes place in a new society, a society in which Claire is almost as a child.  It is the story of Jonas, had we been with him in his time of transition from the world that he left in The Giver until we met him again in Messenger.  The third part of the story is the one that ties all of the various story lines of the series together. In this part, we remeet a lot of the characters from other books and many of the subplots are brought to the foreground.

The first three books showed us three very different utopian/dystopian worlds, worlds with different values, priorities, and issues.  As someone obsessed with cultural anthopology, I loved this premise.  I loved that it made me question my own thoughts and beliefs.  But I felt like that was greatly lacking in this book.  The society from the second section wasn’t really created like the others; it was just sort of there, like a place filler.  By the time she made it to the society that we first met in Messenger, that group was largely healed.  There was little conflict to be seen.  That came from an outside force that needed to be battled in the traditional good versus evil battle.  But none of this happened until very late in the book, making the entire thing feel a bit rushed.  And the conclusion itself really left me feeling a bit unfulfilled.  The previous books were deep, full of questions about human nature, choices, sacrifice, priorities, and values.  The conclusion just seemed rather anticlimatic and a little banal in comparison.

The other thing I had hoped for was answers.  I wanted to know what happened to the other societies.  Did they change?  Did they get worse or better?  The only one that we ever really saw any transformation in was the one of Messenger and the last portion of Son, the society of outcasts.

While it may have been my least  favorite of the series, it is still a good read and a relatively satisfying conclusion to the series.