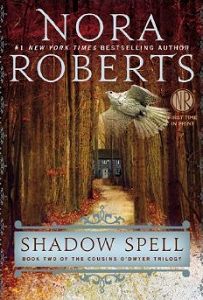 With the legends and lore of Ireland running through his blood, falconer Connor O’Dwyer is proud to call County Mayo home. It’s where his sister, Branna, lives and works, where his cousin, Iona, has found true love, and where his childhood friends form a circle that can’t be broken…

A circle that is about to be stretched out of shape—by a long-awaited kiss.

Meara Quinn is Branna’s best friend, a sister in all but blood. Her and Connor’s paths cross almost daily, as Connor takes tourists on hawk walks and Meara guides them on horseback across the lush countryside. She has the eyes of a gypsy and the body of a goddess…things Connor has always taken for granted—until his brush with death propels them into a quick, hot tangle.

Plenty of women have found their way to Connor’s bed, but none to his heart until now. Frustratingly, Meara is okay with just the heat, afraid to lose herself—and their friendship—to something more. But soon, Connor will see the full force and fury of what runs in his blood. And he will need his family and friends around him when his past rolls in like the fog, threatening an end to all he loves…

Much like the first, Dark Witch, I loved this next book in the Cousins O’Dwyer trilogy!  The stories are so engrossing and sweep me away to another place and often another time.

This book focuses on Connor and Meara.  I love both of these two, and much like Iona and Boyle in the first novel, one is a witch while the other is not.  I love that Meara, although without powers of her own, is a fierce warrior women.  She is loyal and strong and always fighting to protect those she loves.  But she has been hurt and it shows.  That part of her story was so relatable and I loved the vulnerability that it gave her character.

Connor is the book boyfriend.  He’s charming and funny, caring and compassionate, loyal and passionate… and Irish!  He is so patient with her, pushing her to acknowledge her own feelings without forcing it upon her before she was ready.  I love that he refused to give up and kept at with charm and humor.  As laidback as his character tends to be, however, he has a fierce streak of passion against any who would hurt his own.  A pretty sexy trait!

The weaving of the story through time and with the Dark Witches of the past mae made for a rich read.  The old and the new, the mythology, the magic… all of it created a novel that I could not stop reading!!  I can’t wait to start the next, and last :( , in the trilogy.

You definitely have to read Dark Witch first, but this is a fantastic series.


Reading this book contributed to these challenges: