Roughing: Called when a player strikes an opponent in a minor altercation that the referee determines is not worthy of a major penalty.

I’m Kristoffer Halvorson, right wing and team captain for the Austin Amurs. Roughing is my penalty. It’s not like I plan to do it, but hockey is a rough sport.

Hockey is everything. From the minute my four-year-old feet hit the ice, I was all in, and it hasn’t changed since. Nothing else matters as long as there’s a stick in my hands and a puck in my sights.

She was my friend’s girl, and even though he’s gone, she should be off-limits.

Except I took her into my home, married her, and promised to take care of her. Little did I know, she came with more baggage than either of us expected. Now I’m mixed up in something so dark, it may end not only my career, but my life.

I’ll pull out all the stops to protect what’s mine. Things are about to get rough, but I’m not letting her go.

This book could be read as a standalone, but it has characters from both the other books in the Iced series and the books in her RBMC series. It is Kristoffer and Zoey’s story, and it’s a great one.

When he flies out to California to check on his recently KIA’d friends girl, he finds himself quickly involved in a situation he never expected. He discovers Zoey, very pregnant and living in a bad situation. So he swoops in and saves the damsel in distress, feeling all the guilt when he begins to develop feelings for her. And Zoey comes into it with some unexpected baggage, too.

The romance was great, and so too was the emotional aspect of having so recently lost his friend, and all the conflict that brings him in relation to Zoey. And the suspense elements were what really kept me turning the pages. I had to know!

These are two great characters that are not only wonderful together, but who are just as interesting on their own. Great read! 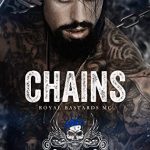