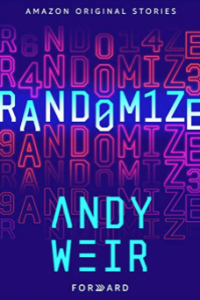 In the near future, if Vegas games are ingeniously scam-proof, then the heists have to be too, in this imaginative and whip-smart story by the New York Times bestselling author of The Martian.
An IT whiz at the Babylon Casino is enlisted to upgrade security for the game of keno and its random-number generator. The new quantum computer system is foolproof. But someone on the inside is no fool. For once the odds may not favor the house—unless human ingenuity isn’t entirely a thing of the past.
Andy Weir’s Randomize is part of Forward, a collection of six stories of the near and far future from out-of-this-world authors. Each piece can be read or listened to in a single thought-provoking sitting.

ANDY WEIR built a career as a software engineer until the success of his first published novel, THE MARTIAN, allowed him to live out his dream of writing fulltime. He is a lifelong space nerd and a devoted hobbyist of subjects such as relativistic physics, orbital mechanics, and the history of manned spaceflight. He also mixes a mean cocktail. He lives in California.

« Now That You’re Here
While You Were Gone »