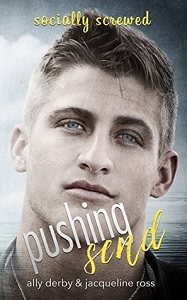 Fitting in has never been something fifteen-year-old Hadley Asher ever aspired to. Three schools in one year brings unwanted and unwelcome attention to a girl like Hadley who only wants to blend in.
After her family moves from Buffalo, NY to the small, upper-class town of Blue Valley in Central New York, Hadley's next door neighbor Lana quickly befriends her, the two becoming nearly inseparable. However, Paxton Jamison, Lana's stepbrother and the boy with the brilliant blue eyes, has to step in to help Hadley deal with Lana, who is hard to handle on a good day.
When an unprecedented scandal and tragedy strike the small community, Hadley becomes its focus, its target. As a result, the girl who hides in books and wants to blend in with the background finds breathing is nearly impossible.

Pushing Send is a yung adult novel with some very deep and intense situations, especially appropriate in this day and age.

Hadley’s life has be turned upside down yet again as she and her family have moved again to a small town in New York.   Her father lost his job after an accident and now her father has addiction issues.  This leaves her nother as the sole breadwinner, overworked and continually making excuses for Hadley’s father.  All of this has meant that Hadley has not only had to grow up fast, but it has really damaged her ability to trust others.  As a result, she just tries to fly under the radar and keep to herself.  But being the new girl in a small school, it is hard to remain anonymous for too long.  Soon after she moves, she meets Lana, her neighbor and soon her best friend.  She also meets her older stepbrother Paxton, with whom she becomes friends as well.

It was at this point that I thought this was going to be the typical love story between a somewhat geeky, socially awkward girl and the gorgeous jock, but there is so much to the story.  Pax likes Hadley and thinks she’s a good influence on his sometimes tumultuous little sister.  Their friendships are unexpected, as Hadley could not be more different.  Lana and Paxton are well off and have had a lot of advantages in life, whereas Hadley and her family are struggling, financially and emotionally.

Things go better than Hadley expected for awhile, until something happens that ruins everything.  It is at this point that everything goes into a horrific doward spiral for her and it becomes almost overwhelming.  Just about everything that could go wrong does.

There are some important plot lines in this book, particularly appropriate for our time.  It highlights the downside of such a digital age and how it can ruin lives.  It shows how quick people are to assume the worst, to judge.  There is also an important theme of mental illness and how much that can go unnoticed in teenagers.  There are also themes of love and forgiveness, compassion and understanding.  These plot lines and themes are well considered and important to the time.

However, there were times when it almost felt like various parts of the book were written for different demographics.  It was something that was very noticeable to me, even as I enjoyed the overall story.  It was only when I was preparing to write this review that I realized that this was written my a middle-school girl and her mother, which explains those variations.  It also explained the massive fangirling going on throughout the book, although that was appropriate to the age of the main character.  But if you haven’t read the series fangirled (The Hunger Games, Percy Jackson, The Fault in Our Stars, etc.),, you will find spoilers to those novels.

The only other thing that gave me pause was the time jumping.  The book takes place over roughly 2 years and there were several moments when the time jumped forward.  While I think the jumping was necessary for the story, I wish there was some kind of indication from the beginning like an italicized six months later or some such thing so as to eliminate confusion.

She has no problem sticking up for what she feels is right, regardless of the social ramifications and that doesn’t always go over well.

She is also a fierce fangirl, and loves to role play on Instagram as @firefandoms.
Her favorite book genre is young adult dystopian. Her favorite book series include, The Hunger Games, Percy Jackson, The Divergent series, The Maze Runner, and The Selection series.

Other books she devours are anything John Green, and Gayle Foreman.

Her books are her life and when Ally gets in trouble at home, her mother grounds her from books, *gasp*

Jaqueline Ross is an author, and mother to Ally. She reads almost everything Ally does and enjoys the romance genre.

She is ‘one of those moms’. Meaning she is overprotective and pushes Ally to do her best at everything she does.