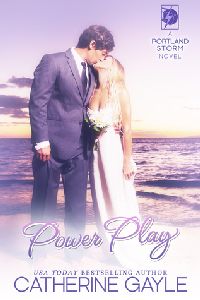 Honeymooning alone in Cabo, injured Portland Storm center Riley Jezek would do anything to get back at his cheating ex-fiancée and backstabbing brother. When a knockout blonde sits next to him at the bar, Riley’s ready to erase the memories of his ex. But when he notices the tears threatening to stain the blonde’s wedding gown, Riley decides it’s time for a Power Play.

Mackenzie Cain thought she had it all figured out. She found the man. She found the fairytale. She thought it was her dream come true. She was wrong. What she found was a nightmare with a crazy fetish. Alone and dressed in couture was not how she envisioned her wedding night.

When the sexy hockey player makes her an offer, Mackenzie can’t refuse. After all, Prince Charming always shows up by chance. But can Riley’s attempt at revenge turn Mackenzie’s new reality into a page-turning romance?

Power Play is the latest in Cattherine Gayles’s Portland Storm series. I can’t say enough good things about this series. The stories are always full of raw emotions and deeply intense situations. The characters are real and smudged with the often harsh realities of life, not sugar coated to become some kind of plastic “ideal.” Her characters are real, flawed and damaged just like we all are in some way.

This novel centers on Riley, a center for the Portland Storm. He is on his honeymoon… alone and without a wife.He’s hurt and angry and definitely not in a great place in his personal life. And then he meets Mackenzie. Everything she thought she was about to have in her life has just been dashed into a thousand, heartbreaking pieces. She’s lost and alone, figuratively AND literally.

Two damaged people in Cabo, both with more baggage than any single person should have to carry. But sometimes those moments are the ones that change everything. It is when we feel lost and shut off from the world that sometimes we find the one thing that can make all the difference.

Catherine writes some of the most beautiful characters I’ve ever read. They are beautiful because of their flaws, not despite of them. They are people that feel real, that pull at your heart as you read their stories. They are people that you can understand and fall in love with.  This book is one of my favorites of the story. The depth of pain within Mackenzie pulled at my soul, tore at it.  She made me feel so much and I loved that!

Such a fantastically emotional read!

« Dreams of Gods & Monsters
A Million Worlds with You »