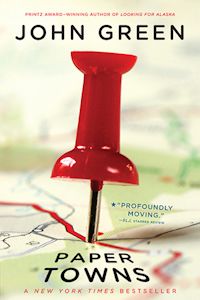 [color-box]Who is the real Margo?

Quentin Jacobsen has spent a lifetime loving the magnificently adventurous Margo Roth Spiegelman from afar. So when she cracks open a window and climbs into his life—dressed like a ninja and summoning him for an ingenious campaign of revenge—he follows. After their all-nighter ends, and a new day breaks, Q arrives at school to discover that Margo, always an enigma, has now become a mystery. But Q soon learns that there are clues—and they're for him. Urged down a disconnected path, the closer he gets, the less Q sees the girl he thought he knew... [/color-box]

As with anything and everything I have read by John Green, I greatly enjoyed this book.  No, I didn’t sob my way through it as I did with The Fault in Our Stars, but it was moving in its own way. This is a book that can’t be easily categorized as any one thing… a romance, a friend read, a mystery, a coming-of-age read.  It isn’t any one of those things, but a combination of all of them.

Q has lived next to Margo his entire life, a childhood friend that eventually became his unrequited first love.  As they grew up, their worlds became farther apart.  She was the popular girl and he was a bit on the geeky side.  He is obsessed with her, blind to anything that could possibly mar his love for her.  One night, she climbs into his window in the middle of the night dressed and coerces him (not that it took much coercing!) into an unexpected adventure.  It’s a night that gives Q a renewed hope for a future with Margo.  But then the next day arrives and everything turns on edge.  Everything Q thinks he knows about Margo is turned upside down and now he has to follow clues, clues that she left for him, in order to find answers.

As Q finds and follows the clues Margo has left, his character grows so much.  He learns as much about himself as he learns about Margo.  One of the most important themes of this book, in my opinion, is that what we see in a person is often very different from the reality.  We see the surface, what we want to see.  And that can make us blind to anything else that could tarnish that perception.  And then when the veil is removed, it leaves you bewildered.  That is Q’s journey.  But this is also a book about friendship.  A group of his friends and hers come together and the stupid cliques of high school, at least in a small way and in a small moment, are ignored   Family dynamics also play a key role in the unfolding story, and how those dynamics can affect a person.

There is so much to enjoy about this book.  There are no easy answers, no perfect solutions, no perfect people.  And that is a good thing because that is how life and the people living really are. 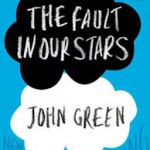 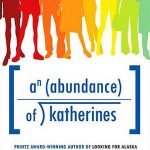