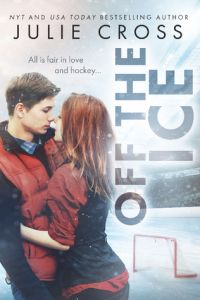 All is fair in love and hockey…

Claire O’Connor is back in Juniper Falls, but that doesn’t mean she wants to be. One semester off, that’s what she promised herself. Just long enough to take care of her father and keep the family business—a hockey bar beside the ice rink—afloat. After that, she’s getting the hell out. Again.

Enter Tate Tanley. What happened between them the night before she left town resurfaces the second they lay eyes on each other. But the guy she remembers has been replaced by a total hottie. When Tate is unexpectedly called in to take over for the hockey team’s star goalie, suddenly he’s in the spotlight and on his way to becoming just another egotistical varsity hockey player. And Claire’s sworn off Juniper Falls hockey players for good.

It’s the absolute worst time to fall in love.

For Tate and Claire, hockey isn’t just a game. And they both might not survive a body check to the heart.

When I was offered the chance to read the ARC of this by Entangled Publishing, I jumped at it!  I’m all about any book that features hockey at any level of the game.  And it is a book that yanked me in from the very first page.

There is a lot to love about the story in Off the Ice.  The characters are well-developed and feel like real people.  Tate is a goalie on his high school team, thrust into the limelight when the star goalie is suddenly ostracized by most of the town.  He loves the game, but it comes with baggage for him and he just isn’t sure where he fits anymore.  Claire is a year older than Tate, taking a break from college to put her family first during a crisis.  She has baggage of her own and there are days when she just doesn’t know which end is up.

These are characters that are thrust into adulthood too soon, dealing with issues that they shouldn’t have to.  And while my heart bleeds for their characters, I can’t help but appreciate that they are characters that act with maturity and strength.  Their stories aren’t all light and happy, but they are real, with all of the emotions that go along with real life.  They were both characters that I understood and related to.  And most of all, I loved that their romance wasn’t the stuff of fairy tales.  It had more than its fair share of angst and issues.  In other words, it was real.

I didn’t want this book to end.  I loved it.  I loved the story.  I loved the romance.  I loved the issues and conflicts and that they had the undeniable ring of truth.  This was my first book by author Julie Cross, but it won’t be my last.

Julie Cross is a NYT and USA Today bestselling author of New Adult and Young Adult fiction, including the Tempest series, a young adult science fiction trilogy which includes Tempest, Vortex, Timestorm (St. Martin’s Press). She’s also the author of Letters to Nowhere series, Whatever Life Throws at You, Third Degree, Halfway Perfect, and many more to come!

Julie lives in Central Illinois with her husband and three children. She’s a former gymnast, longtime gymnastics fan, coach, and former Gymnastics Program Director with the YMCA. She’s a lover of books, devouring several novels a week, especially in the young adult and new adult genres.

Outside of her reading and writing credibility’s, Julie Cross is a committed–but not talented–long distance runner, creator of imaginary beach vacations, Midwest bipolar weather survivor, expired CPR certification card holder, as well as a ponytail and gym shoe addict.