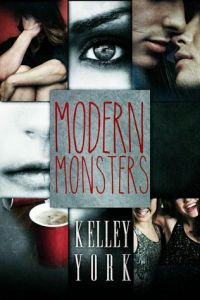 Vic Howard never wanted to go to the party. He’s the Invisible Guy at school, a special kind of hell for quiet, nice guys. But because his best friend is as popular as Vic is ignored, he went…

And wished he hadn’t.

Because something happened to a girl that night. Something terrible, unimaginable, and Callie Wheeler’s life will never be the same. Plus, now Callie has told the police that Vic is responsible. Suddenly, Invisible Vic is painfully visible, on trial both literally, with the police, and figuratively, with the angry kids at school. As the whispers and violence escalate, he becomes determined to clear his name, even if it means an uneasy alliance with Callie's best friend, the beautiful but aloof Autumn Dixon.

But as Autumn and Vic slowly peel back the layers of what happened at the party, they realize that while the truth can set Vic free, it can also shatter everything he thought he knew about his life…

One of the first things that struck me about Modern Montsers was the voice, that of a teenage male and something that there is not enough of in YA literature.  And that voice was convincing and empathetic.

Vic is not the stereotypical YA hero and I LOVED that.  His best friend is one of the more popular guys, but he is not.  He has a stutter and, largely because of that, he is rather socially awkward.  He isn’t portrayed as the shy, socially awkward guy who is secretly a brilliant guy either.  Instead, he barely scrapes by academically.  But what he is is loyal and kind, unable to turn his back on anyone that needs help.  Unfortunately, this can also get him in trouble… and it does.

His heart is in the right place and he has the best of intentions when he sees a classmate at a party, drunk and sick.  He helps her and finds a place for her to sleep it off.  Later, she is attacked and his face is all she remembers.  One thing leads to another, and he is suspected of attacking her.  His own mother believes the worst of him, leading to an interesting subplot.  His best friend’s family takes him in, the father defending him, when his own mother can barely look at him.  Then he finds an ally in the most unlikely of places… Callie’s best friend Autumn.

I love Autumn and her role in the story.  She is intelligent and she thinks for herself.  She is skeptical and thoughtful and loyal and she sees beyond the surface, really looking to discover who people are for themselves, not for what others make them out to be.

The interesting thing is that there are almost two main plots in the book.  The mystery of what happened to Callie and the romance.  Neither one overshadowed the other; both of them equally integral to the story and character progression.  The romance was beautiful, often funny, and always sweet.  And the mystery parts of it were twisting and turning.  The story there was intriguing, and all too realistically probable.

There were moments when I just wanted to jump into my book and alternately hug on Vic and throttle his mom and others for how they treated this genuinely nice guy.  The story line was gritty and real, and extremely well handled.

In it’s own way, this book was beautiful.  Yes, there were story lines of betrayal and assault and neglect, but the emotions behnd it all were what made it beautiful.  There were themes of emotional neglect, peer pressure and pressure from family, themes of bullying and acceptance, friendship and loss.  And all of these things were woven together to create a wonderful story!

Once upon a time, Kelley York was born in central California. And it’s there she she still resides with her wife, step-daughter, and way too many pets. Kelley is a sucker for dark fiction. She loves writing twisted characters, tragic happenings, and bittersweet endings that leave you wondering and crying. Character development takes center stage in her books because the bounds of a person’s character and the workings of their mind are limitless.