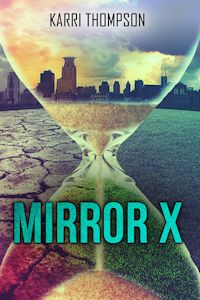 Cassie Dannacher wakes up in a hospital over 1,000 years into the future after her space capsule is retrieved from space. She soon learns that 600 years prior to her arrival, the earth was struck by a plague, killing over half of the world’s population. Naïve and desperate, Cassie, who longs for home and is having trouble adjusting to the new, dictatorial 31st century government, is comforted by Michael Bennett, the 20-year old lead geneticist at the hospital where she was revived.

But why is Cassie in genetics’ hospital in the first place, and why do several of the people around her seem so familiar, including Travel Carson, the hot and edgy boy she is fated to meet? Soon she discovers there is a sinister answer to all of her questions – and that they want something from Cassie that only she can give.

Mirror X is set in what is supposed to be a utopian, technologically and societally advanced world.  But in reality, it is a dystopian in which horrible things may be done for altruistic reasons.  In many ways, this book reminded me of Aldous Huxley’s Brave New World.  Humanity was lost in the face of science, hidden behind an agenda that, on the surface, would seem positive.

This book was difficult for me to read at times, the issues at hand often reminding me too clearly what I have recently lost.  Women in similar circumstances may find these themes particularly poignant, even meaningful, even as it is hard to read.  But there is also a level of empathy to be had for many of the characters.

Cassie was an interesting character, our heroine.  She died in Arizona in the year 2022 and wakes up 1,003 years later in a hospital in Los Angeles.  Not only is everyone in her life long gone, the world as she knew it is also gone, mostly without a trace.  She is surrounded by people she doesn’t know, people who will not give her straight answer about her future, setting the stage for a life filled with secrets and distrust.  This is worsened when the only people she does feel close to also lie to her and withhold vital information.  True, many times it was for her own protection, but lies are lies and I could empathize with her feelings.  There is a level of empathy that seems to be largely mission in the society of 3025 and it makes those from that time unable to understand or relate to Cassie’s personality and emotional reactions.  So much of treatment made me bristle, so much that I felt like my blood pressure was going to go through the roof!

The characters in this book all evoked emotion, which is something I love to find.  Michael irritated me throughout most of the book.  Lies, lies, more lies.  There were reasons, reasons that made a certain amount of sense.  The result was a character that I still don’t entirely trust.  He spent much of his time fawning over her and whining about their situation, but for most of the book he spent little time actually doing a whole lot about it.   Mentioned in the blurb, I thought Travel was going to be a more central character in the novel.  He does have a major role, but his story line went in places I did not expect.  I am still not sure how I feel about that.  I think Magnum may be my favorite, the tech rebel who goes above and beyond.  He rocks!

There was some insta-love, too, which I generally hate.  But in this case, I thought it really worked.  She has been thrust into a world that makes no sense to her, forced into situations that are violating and rather reprehensible.  It was Cassie, grasping to have some kind of true human connection with someone in this weird world that she felt no connection to.

The ending was the only part that I questioned.  It was very hurried and seemed to tie things up too easily and too neatly.  I don’t know if this was purposeful, but, with all of the betrayal and distrust throughout the novel, it could just as easily be a setup for the next novel.

I will definitely be reading the next book in this series.  I couldn’t put this one down, even through the parts that most disturbed me!

I grew up in San Diego County and attended San Diego State University, earning a bachelor’s degree in English, a master’s degree in education, and my teaching credential. I’m a high-school English teacher in the East County of San Diego where I also live with my husband, John, our son, and two dogs. Earning a Ph.D. in English and teaching at the college level are on my bucket list.

Being a lover of Victorian literature, my favorite author is Charles Dickens although I haven’t quite finished reading all of his books. Someday I’ll finally finish David Copperfield – I promise. If you’re one of my students, you’re either laughing or shaking your head at this.

In my free time, I like to jog, ski, and travel. After a recent trip with my family to Germany, I have plans for a new YA romance, and I’m hoping our upcoming 2014 trip to Ireland will also inspire another romance novel.

I lead a very busy life, but when I’m not teaching, grading papers, or attending my son’s football games and tennis matches, I find time to write novels, my greatest passion.

« Views from the Depths
Flying with Fire Cover Reveal »