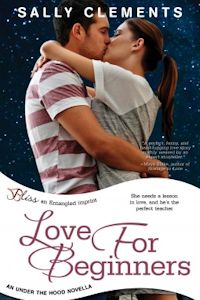 She needs a lesson in love, and he’s the perfect teacher.

Mechanic Melody Swan is looking for a man who can share her hopes and dreams, but she swore she would never lose herself to passion. When sexy Heath Starr agrees to temporarily sub in the Under the Hood garage for his sister, Mel sees the perfect opportunity to enjoy being with a man without becoming attached.

eath came to Meadowsweet to photograph nature, not find a hookup, especially since his last relationship ended in disaster. He vowed he’d never break another woman’s heart, and in turn, protect his own. Still, when Mel offers to serve as his outdoor guide, he can’t refuse.

Mel may say she’s only looking for right now, but her body is speaking a whole different language. And Heath’s viewfinder is drawn to her time and again. When the two find themselves isolated in a rustic cabin, they could both break their promises if they aren’t careful…

This is the second novella in the Under the Hood series.  I love that these books center around independent women who work in nontraditional jobs, doing for themselves AND other women.  It’s a great bit of female empowerment in a fun way.

This time, the story focuses on Melody Swan, a woman who comes with a plane full of baggage.  Her nickname is “Ice Queen” and it is an apt moniker.  That iciness made it truly hard to warm up to her as a character.  Instead, I felt more for Heath Starr, the Ladyslayer.  Player or not, he was a far warmer and far more sympathetic character.  He is also the brother of Alice, one of Melody’s best friends and co-owner of their garage.

To say that Melody has issues with men, relationships, and sex would be an understatement.  The entire thought of intimacy leaves her icily cold to the point of revulsion.  This is completely at odds with her deep desire to have a lifetime relationship with a man.  In a perfect world, that would mean nothing more than a deep connection and no intimacy.  She was so cold and so aloof about what makes her that way that it was hard to connect with her.  It felt like Heath was putting it all on the line for her, and she was not giving of herself much at all.  Later we find out why she is the way she is, and it makes a little more sense.  But it still seemed like an extreme overreaction to the situation.

In the end, however, the story became as romantic and sweet as the first book.  It has the perfect happy ending!

The moment Heath looked at her mouth, a wave of longing had come out of nowhere, blindsiding her. The urge was disturbing because it was so powerful. She’d worked hard to keep inconvenient feelings of attraction under control (Loc. 232).

If she were an author, she’d write a best seller about a woman who didn’t think that sex was the ultimate validation of womanhood (Loc. 247).

I guess what I’m saying is—you turn me on. You’re the first man in years I’ve been attracted to that I’ve tried to go further with (Loc. 1167).

This is a fun read with a great ending and even a few twists! 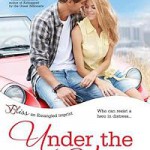