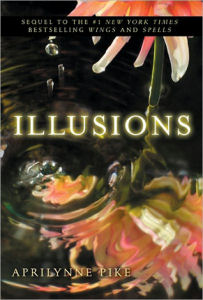 "I don't do patrols, I don't go hunting, I just stick close to you. You live your life. I'll keep you safe," Tamani said, sweeping a lock of hair from her face. "Or die trying."

Laurel hasn't seen Tamani since she begged him to let her go last year. Though her heart still aches, Laurel is confident that David was the right choice.

But just as life is returning to normal, Laurel discovers that a hidden enemy lies in wait. Once again, Laurel must turn to Tamani to protect and guide her, for the danger that now threatens Avalon is one that no faerie thought would ever be possible. And for the first time, Laurel cannot be sure that her side will prevail.

There is even more of the mythology that I love so much in this book.  Like in Spells, Shakespeare’s writings are the human retellings  of faery lore, Shakespeare being one of the few mortals allowed into the confidence of the fae.  There are also other “human” faery tales that are mentioned as a part of the mythology of this faery world.  All of this means that there is much more of the reimagined Avalon and the mythology of King Arthur and Camelot.  Mab of traditional faery lore is also a part of the story line this time.

I loved the humor involved with bringing technology to the faerie sentries of Avalon on temporary duty in the human world.  Not only do they have iPhones, but the little detail of mythology that the touch screens don’t work as well with the plant cells of the faerie as they do with the animal cells of the humans and their innate electrical currents is hilarious as  they try and try to make them work.

I also liked that the boy rivalry between David and Tamani, although faerie versus human, was typical of boy struggles that we all know of.  Chelsea’s moment of vulnerability came when she confessed to Laurel about her feelings for David, a touching moment, but one that seemed less realistic than the situation between David and Tamani.  This isn’t really a normal teenage girl situation, especially handled as it was in the book.  I really loved that this whole situation wasn’t glossed over at all.  In fact, sometimes Laurel’s inability to get it together was downright annoying.  But these are very human traits and reactions and made her character one that a reader could feel for.  I liked that Laurel was portrayed as more personally strong with the two boys than she had been, no longer wary of sticking up for herself.

Laurel really grew in this book, seeming to embrace her faerie side far more than she had in the previous books.  The increased sentry presence in the woods behind her house prompted her to make potions and powders to keep them safe, showing more confidence in her faerie skills than we’ve seen before.  She also became more of a “thinker” in this book.  Her growth as a person was obvious in how she handled situations and choices that had to be made.  She spent more time thinking things through than she previously had.

As soon as their eyes locked, the months since she’d last seen Tamani shrank from an eternity to an instant (3).

He’d been back for about two weeks, and everything in Laurel’s life had been thrown into chaos.  Sexy, sexy chaos (40).

“I just don’t want to cozy up to the guy whose girl I have every intention of stealing,” he said flatly, without looking at her (51).

“But love is something that has to be as selfish as it is unselfish. You can’t make yourself love someone because you feel like you should. Just wanting to love someone isn’t enough (113).”

I absolutely love this series!  I definately recommend this one, but only after reading Wings and Spells.