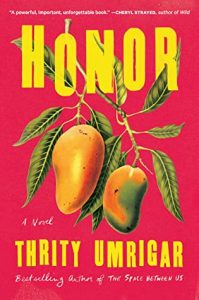 In this riveting and immersive novel, bestselling author Thrity Umrigar tells the story of two couples and the sometimes dangerous and heartbreaking challenges of love across a cultural divide.
Indian American journalist Smita has returned to India to cover a story, but reluctantly: long ago she and her family left the country with no intention of ever coming back. As she follows the case of Meena—a Hindu woman attacked by members of her own village and her own family for marrying a Muslim man—Smita comes face to face with a society where tradition carries more weight than one’s own heart, and a story that threatens to unearth the painful secrets of Smita’s own past. While Meena’s fate hangs in the balance, Smita tries in every way she can to right the scales. She also finds herself increasingly drawn to Mohan, an Indian man she meets while on assignment. But the dual love stories of Honor are as different as the cultures of Meena and Smita themselves: Smita realizes she has the freedom to enter into a casual affair, knowing she can decide later how much it means to her.
In this tender and evocative novel about love, hope, familial devotion, betrayal, and sacrifice, Thrity Umrigar shows us two courageous women trying to navigate how to be true to their homelands and themselves at the same time.

Honor is a beautifully written book that will reside in my soul for a very long time. It was deeply emotional and felt deeply personal, even though it was written about a place and a culture that is not my own. It is an incredibly thought-provoking novel that makes the reader question what honor truly means. It looks at deeply-rooted tradition, and the toxicity that sometimes comes with that kind of tradition. There are themes of family, hatred, misogyny, sacrifice, betrayal, ignorance, religious bigotry, tradition, honor, and even hope. The author’s writing is lush and vibrant, drawing the reader into another world. It is not always an easy book to read, the subject matter often horrifying and gutwrenchingly sad, but it isn’t meant to be easy. The story is that of a social horror, so it should be uncomfortable.

Honor is really two parallel stories, that of Meena and that of Smitra. Both have experienced the traditional, patriarchal society of India. Their stories have their similarities, but far different outcomes. Mohan’s role in the book is equally important, representing both the entitled male privilege that is so present in India and the good that is also within the country. Through their stories, honor begins to take on multiple means. For some, honor means adhering to religious and cultural norms. Any step in a different direction can me shame and even death. For others, honor means honoring oneself, doing what is right in the face of personal sacrifice.

This is a truly beautiful book, and an important one.

“This is what it meant to care so much about another human being that you were willing to sacrifice everything, even pride and self-respect.”

“Nobody taught us what I know today-the most dangerouos animal in this world is a man with wounded pride.

A journalist for seventeen years, Thrity Umrigar has written for the Washington Post, the Cleveland Plain Dealer, and other national newspapers, and contributes regularly to the Boston Globe’s book pages. Thrity is the winner of the Cleveland Arts Prize, a Lambda Literary award and the Seth Rosenberg prize. She teaches creative writing and literature at Case Western Reserve University. The author of The Space Between Us, Bombay Time, and the memoir First Darling of the Morning: Selected Memories of an Indian Childhood, she was a winner of the Nieman Fellowship to Harvard University. She has a Ph.D. in English and lives in Cleveland, Ohio.