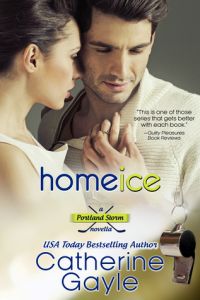 FTC Disclosure: I received this book for free from the publicist in exchange for an honest review. This does not affect my opinion of the book or the content of my review.

There’s only one person Portland Storm head coach Mattias Bergstrom allows to see his soft side: his sister, who was born with Down syndrome. She lives in Sweden, so he doesn’t worry he’ll accidentally reveal other than the hard-assed defenseman-turned-coach his players know. At least not until his sister’s doppelganger leaps for one of his young D-men before the team’s charity skills competition and melts Mattias’s frozen heart.

Paige Calhoun has her hands full with four exceedingly boy-crazy, hockey-loving daughters—three teens and a pre-teen with Down syndrome. Everyday life is a challenge. Taking all four girls to the StormSkillz event with no assistance? The magnitude of her task was daunting enough before her youngest spotted the hockey player of her dreams and barreled through the crowd to claim him.

The team’s sexy-as-sin coach intervenes, and Paige feels just as boy crazy as her daughters. Charmed by the youngest, he decides to give the girls a weekend they’ll never forget. It never crossed his mind that, in doing so, he might end up giving himself an unexpected happy ever after with Paige.

This installment focuses on Bergy, one of the coaching staff, rather than one of the players.  On the surface, he is a bit gruff, necessary as a coach of an NHL team.  But there are things in his life that very few people know about and one of those things is is love for his sister Linnea, whoi has Down’s Syndrome.  When he meets Paige and her four daughters, he is taken with them all, but especially the youngest.  Sophie is just 11 and she, too, has Down’s.  Paige has her hands full with four girls, all deeply in love with one of the Storm’s players, Levi “501” Babcock.  After winning tickets to a Storm event, Paige and her girls find their lives forever changed.

I honestly don’t know just what or who I loved best in this book.  There is no question that Bergy was more than a little bit of a silver fox.  I don’t know who was the physical inspiration for Catherine Gayle , but all I could see was Eric Dane.  And I loved Paige and her dedication to her daughters, and theirs to her.  And then there is Sophie, the little girl who was bound to do anything and everything.  I truly loved that instead of coddling her, Paige swallowed her own fears to support her daughter.  I also loved that Bergy and his friends did everything they could to make little Sophie’s dreams come true.

These are the things that make these books so wonderful.  The romance is always beautiful, yes.  But I love that these books are so much more than that.  There are real issues and those are really what make the books.  The author doesn’t shy away from presenting different aspects of life in a realistic way with no sugar coating it and I love that.