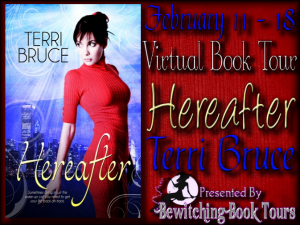 Scroll down to for a guest post by Terri Bruce and to read more about the book, read an excerpt, and to learn more about the author!  And don’t forget the GIVEAWAY, posted at the end of this tour stop!

Be sure to read my review of this fabulous novel here!

Welcome to my virtual birthday party! This month, I’m celebrating three important dates: my birthday, the six-month anniversary of my “book baby,” Hereafter, and the feast of Parentalia (February 13 th-21st), an ancient Roman celebration to commemorate one’s ancestors and placate the spirits of the dead.

I came across the ancient Roman festival of “Parentalia” while researching burial and afterlife beliefs for Hereafter. Somewhat similar to the American “Memorial Day,” Chinese “Ghost Festival,” and the Mexican “Day of the Dead,” Parentalia was a nine-day feast honoring one’s ancestors, running from February 13th to the 21st. During the festival, family members decorated their ancestors’ tombs with wreaths of flowers and left offerings of wheat, salt, wine, bread, and violets to placate the dead. The festival ended at midnight on February 21st with the rite of Feralia, a type of exorcism or placation of angry or malevolent spirits conducted by the head of the family. Parentalia was followed by Caristia, somewhat akin to American Thanksgiving, on February 22nd, in which families gathered together for a private banquet and to offer gifts of food and incense to their deceased ancestors. Caristia was about celebrating the amity and goodwill between the living and the dead, whereas Parentalia and Feralia were about building that amity.

Similar to Chinese Ghost Festival and Mexican Day of the Dead, Parentalia and Caristia were marked by a dual belief/aim: to honor/placate ones’ deceased ancestors so that they would continue to bestow blessing on the family (and to ensure they did not turn into lemures—the restless or malevolent dead) and to mend relations with one’s family—both living and dead. It was a time to set aside grievances, make amends, and strengthen family bonds to ensure the continued well-being of the family. Interestingly enough, the ancient Romans felt so strongly about the importance of Parentalia, that it’s observance was a mandated responsibility of the head of each family—that is, the head of the family was required to observe the rites, including decorating the family’s tomb. In part, this was due to the belief that the deceased who were not commemorated by the living would return as lemures— malevolent ghosts—to haunt and torment the living; therefore, it was in everyone’s best interest to ensure that the dead were kept happy.

It’s important to note that Parentalia was specifically for dealing with ancestor spirits—that is, spirits of one’s family. In contrast, the feast of Lemuralia or Lemuria, held in May, was specifically to deal with Lemures—the “kinless” dead, who became malevolent and destructive, in part because they had no one to send them placating gifts of incense and food and to commemorate them and decorate their tombs during Parentalia. Lemures are akin to “Hungry Ghosts” in Chinese mythology—angry, jealous spirits bent on destruction. Lemuralia was much more akin to an exorcism—rather than placating and soothing spirits and ghosts, Lemuralia was about getting rid of them.

I’ve always found “veneration of the dead” rites fascinating, perhaps because, growing up, my grandmother and mother were absolutely fastidious in observing Memorial Day. Every year they prepared pots of flowers for the family plot where my grandfather, great grandparents, great uncle, and great aunt rest, plus two additional pots—one for my grandmother’s first husband and their baby and for my grandfather’s first wife. Since my mother died, I’ve tried to continue the tradition, though I know have to visit two cemeteries in different states to do it (so my visits aren’t always on Memorial Day itself).

I also find the belief in a two-way link between the living in the dead extremely interesting. In most modern cultures, those that believe in ghosts or spirits belief that the dead watch over and in some cases, protect us. However, that protection is not generally tied to a requirement that the living watch over or even remember the dead. In ancient times, however, there was a strong belief that it was the duty of the living to remember the dead. Modern sensibilities advocate “moving on” and “letting go” of those who have died, generally viewing the living as completely cut off from those who have died.

It was, in part, my interest in this dichotomy between ancient and modern beliefs that led me to write the Hereafter series—I wanted to explore what would happen if those ancient beliefs in the link between the living and the dead were still in place today—how might such beliefs mesh with modern sensibilities. Personally, I believe it is important to remember those who came before us, and I’m always thrilled when I see that people are still celebrating these “veneration of the dead” festivals.

So there you have it—happy Parentalia everyone! And because I loved the idea of Parentalia so much, look for a mention of it in the second book of the Hereafter series, Thereafter—coming June 1st from Eternal Press!

Thirty-six-year-old Irene Dunphy didn’t plan on dying any time soon, but that’s exactly what happens when she makes the mistake of getting behind the wheel after a night bar-hopping with friends. She finds herself stranded on earth as a ghost, where the food has no taste, the alcohol doesn’t get you drunk, and the sex…well, let’s just say “don’t bother.” To make matters worse, the only person who can see her—courtesy of a book he found in his school library—is a fourteen-year-old boy genius obsessed with the afterlife.

This sounds suspiciously like hell to Irene, so she prepares to strike out for the Great Beyond. The only problem is that, while this side has exorcism, ghost repellents, and soul devouring demons, the other side has three-headed hell hounds, final judgment, and eternal torment. If only there was a third option…

Add it to your bookshelf:  Goodreads | Shelfari | Library Thing

She wasn’t sure what to do next. The house seemed quiet and still—in fact, almost dead. She listened hard. She couldn’t quite put her finger on it, but somehow the house, her house, seemed foreign and strange. The house seemed to be holding its breath, almost as if it was waiting for something. She felt the thick, gathered pause pushing around her. Irene shivered. She crossed her upper arms, trying to smooth away the sudden goose bumps. How could she get goose bumps if she was dead?

The phone rang, causing her to jump. Her drink crashed to the floor. She stared at the phone stupidly for a moment, and then, recognizing LaRayne’s phone number on the caller I.D., she grabbed the receiver.

“Yes! It’s me!” Relief flooded through her. LaRayne could hear her!

There was a pause and then LaRayne said, “Hello?”

“LaRayne? Can you hear me?”

Relief fizzled away. Disappointment washed over her, so strong her knees buckled and she grabbed the counter for support.

The line went dead. LaRayne had hung up.

The phone rang again. Irene let the answering machine pick up this time.

Irene cleaned up the spilled drink, sweeping the broken glass into a dustpan and dumping it in to the trash, and then mixed herself another one. She wandered back to the hall and then back to the kitchen and finally to the living room where she dropped heavily onto the couch. She sipped her drink, not really tasting it. Then she spied her laptop across the room on a chair. She fetched it, firing it up.

Email. Yes, that’s it—email. I’ll email everyone and tell them what happened, she thought through a fog of mounting hysteria.

Even as she thought it, dully watching the computer scroll through start-up screens, the “drunk emailing” incident of a few years ago—which had led to then-boyfriend Chase becoming ex-boyfriend Chase—came to mind. The part of her that was still thinking rationally pointed out that maybe it wasn’t such a good idea to email anyone until she knew for certain what exactly was going on.

You still don’t know what you want anyone to do, she thought. Call a doctor? Perform an exorcism? What, exactly, was the remedy here?

The giveaway is tour-wide and each of two winner will recieve a gift pack of the things listed below and shown in the pic below!

2 winners – each will receive a gift packs containing (picture attached):