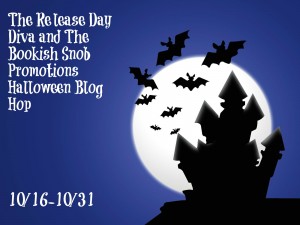 Welcome to my Halloween Hop!

There is nothing better than Halloween and some fabulous scary stories!  So I thought I would share one of my own and then offer you a fabby prize package for one lucky winner, full of spooky reads!  So read on…

For what seemed like forever, there was just nothingness.  There was no sound, nothing to see, not even a whisper of air across the skin.  It was absolute nothingness, the kind that drags you to the edge of sanity and pushes you silently over it.  It was so absolute that she felt like her mind, what was left of it, was floating free, no sense of her own body remained.

Then there was something, the slightest touch, brushing across her skin.  Slowly, she came back to herself, wincing as a blinding pain shot through her skull behind her eyes.  She opened them, long blonde hair whipping around her head, stinging her face and eyes.  It was silent and dark, the moon high in the midnight sky.

Clutching her throbbing head, she slowly sat up and looked around her.  She was on a beach, dark and deserted, surrounded by jarred candles still flickering in the wind.  She sat there for a moment, her palm pressed to her aching forehead, trying to think through the pain.  What is going on?  Fear washed over her as she realized that she didn’t have an answer to her own question.

It didn’t seem familiar, this beach.  Somehow, she knew that she had never been here before and she had no idea how she had gotten here now.  She looked over her shoulder at the buildings behind her, past the park bordering this stretch of beach, hoping to find answers.  Nothing.  Gingerly, she stood up and looked around her, holding her pounding head in both hands.  Not a single familiar landmark in sight.

She stood there for a long time, gazing out over the water, lost in thought as she tried to remember.  Everything was blurry around the edges and just beyond reach.  She felt a sense of urgency that she couldn’t explain, the feeling that she needed to hide, and quickly.  She didn’t know why or from whom, just that if she wanted to survive, she needed to hide.  Gritting her teeth against the throbbing pain in her skull, she ran for the shore and the town beyond it, anxious to get out of the path of unknown danger.

There was a cluster of buildings in the park, near the parking lot, and she ran to them, hoping for a restroom and a mirror.  She could only hope that seeing her own face would trigger something in her, tell her who she was and what was happening to her.  She staggered inside and was immediately assaulted by the smells of unwashed people and unflushed toilets.  But none of that really registered as she lunged for the sinks and the huge mirror on the wall above them.  She stood in front of the mirror and stared into the rust-stained sink, gripping it until her knuckles turned white with strain.  She needed to look, to know, but deep in her soul, she knew that what she would see would forever change her and she was scared of that.

She took a deep breath and raised her eyes.  She met her mirror image’s gaze and held it, staring into her own eyes before really looking at herself.  At that moment, she realized that which she hadn’t noticed on the beach.  She was covered in blood and she somehow knew it wasn’t her own.  Blood covered her face, her hair, her skin, her clothes.  And then she knew everything.  She knew what she had done.  A malevolent smile spread across her face as she stared at herself in the mirror.  It was All Hallow’s Eve and she was free.

Enter the giveaway to win a fabulous prize pack of 11 ebooks in your choice of Nook or Kindle!  One lucky winner will be randomly chosen!  You can click on the links below to read about the books in the prize pack.