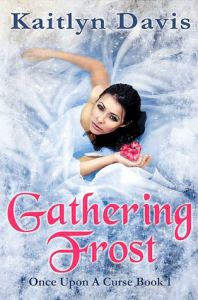 [color-box]Jade was only a little girl when the earthquake struck. Before her eyes, half of New York City disappeared, replaced by a village that seemed torn out of a storybook. Horses and carriages. Cobblestone streets. A towering castle. And, above all, a queen with the magical ability to strip emotions away.

Ten years later and Jade has forgotten what it is to feel, to care...even to love. Working as a member of the queen's guard, she spends most of her time on the city wall staring at the crumbling skyscrapers of old New York. But everything changes when the queen's runaway son, Prince Asher, returns. Jade is tasked with an unusual mission--to let the Prince capture her, to make him trust her, and then to betray his secrets to the crown. In return, she'll earn her freedom. But life outside the queen's realm is more than Jade bargained for. Under Asher's relentless taunts, her blood begins to boil. Under his piercing gaze, her heart begins to flutter. And the more her icy soul begins to thaw, the more Jade comes to question everything she's ever known--and, more importantly, whose side she's really on.[/color-box]

Gathering Frost is the first novel in Kaitlyn Davis’ new series, Once Upon a Curse.  It tells the story of Jade, once a happy little girl living in New York Ciry until an earthquake shakes her world in unimaginable ways.

It wasn’t just her city that was destroyed, but the way of life all over the world.  The earthquake allowed the magical realm to merge with the Earth’s realm, and that magic changed everything.  In New York, the city was taken over by an ice queen named Deirdre, living under a curse that gave her great magic but took away any hope of true love of any kind for herself.  Her only way to feel was by stealing emotion from those around her, the people of NYC that came under her thrall.  When little Jade first saw her, she was certain that the beautiful woman was a princess sent to save them.  But that was not what happened…

Jade’s life changed and she became a warrior in the service of the queen, the only girl to make that choice.  When out on a mission within the ruins of NYC, she came upon a face she had been trained to recognize… Prince Asher, the queen’s runaway son.  After telling the queen, she finds herself on a mission to capture him, but nothing goes as planned.

Feelings are something that the people of the new kingdom remember nothing about.  The thrall that they are under takes that part of their humanity, reducing relationships to nothing more than practical interactions.  Yet Jade still yearns for freedom, even if she doesn’t know why.  Whenever she is in the ruins, she seeks out the library and the knowledge it holds, dreaming of a world outside the walls and away from the queen’s hold.  She is such an interesting character and watching her as she learns about feelings and emotion is interesting.  She has no idea what the love of a friend is like, much less the romantic feelings of love.

Feelings and magic are at the heart of this story, and it is hard to pick a favorite character beyond Jade and Asher.  Even the evil queen… she has a story of her own that makes her often a sympathetic character.  The idea of a world without any emotion is terrifying and makes you realize just how much emotion is a part of being human.

This is a bit of a retelling that reimagines the Sleeping Beauty tale in a totally different way.  Sleeping Beauty is not literally asleep, but her humanity is asleep with the lack of emotions.  Such an original take on a classic tale!!

Always blessed with an overactive imagination, Kaitlyn has been writing ever since she picked up her first crayon and is overjoyed to share her work with the world. When she’s not daydreaming, typing stories, or getting lost in fictional worlds, Kaitlyn can be found indulging in some puppy videos, watching a little too much television, or spending time with her family.

« A Prayer for Owen Meary
Angelfall »