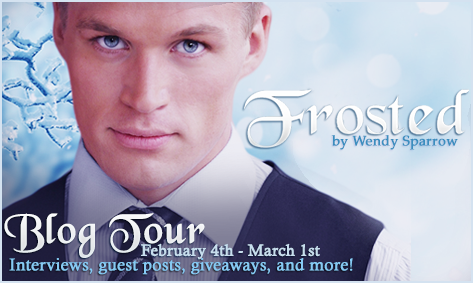 Welcome to the Frosted Blog Tour!

Today, I am happy to be sharing an interview I did with author Wendy Sparrow as a part of the Frosted tour.  So read on to read that interview, learn more about the book and the author, and to enter a fabulous giveaway!  You can also read my review of this amazing book here.

Seven years ago, Kate Finley fell through the ice into the Winter World and straight into the heart of its king, Jack Frost. Then cold feet set in and Kate ran from the one man who made her feel complete.

Jack let his queen go back to the mortal world to say goodbye but she escaped out of his reach to sunny Florida. Now time is short, and he must convince his runaway bride to give him a second chance to melt her heart.

The Diva:  What inspired you to write this book?

Wendy:  I had a dream about Jack Frost trying to get to a stubborn Kate who was purposefully avoiding the snow. I get a lot of ideas in a year and most I toss around and drop, but this one stuck with me and I wrote it down. When other scenes starting drifting into my head I started writing it.

The Diva:  Do you feel you have a specific writing style?

Wendy:  Quirky. Does that count as a writing style? I know my editor had to kill off a bunch of ellipses and some of my inner dialogue gone astray so it’s slightly less deranged and more just quirky. I’m also a pantser—writing by the seat of my pants, and I don’t favor a genre or audience age.

The Diva:  How did you come up with the title?

Wendy:  Frosted has been Frosted right from the beginning. From the first word on the page it was called Frosted. I was glad my publishing company let me keep the title.

The Diva:  Is there a message in your novel for your readers?

Wendy:  I think the message in everything I write is that there is a happily-ever-after out there for you. I try to make my characters as imperfect as I can because it’s not just the beautiful people who can be part of a love story. Kate is far from perfect. She’s a girl from a broken family who’s grown up in Michigan and she can’t see herself as a queen much less someone who Jack would want to spend forever with. Her story has bumps and bruises like a realistic love story, but she manages to find something magical, and I think we all deserve a little magic in our lives.

The Diva:  Are any of the scenes in this book based upon experiences or people you know?

Wendy:  Yes. Kate is actually based on a friend’s take-away emotions from her parents’ divorce. I grew up with two parents whom I’ve never doubted love each other so as I’ve seen the fall-out in other people’s lives from difficult divorces, I’ve realized how tough it must be to resolve those feelings when you start your own relationships as an adult.

The Diva:  If you had to do it all over again, would you change anything in your latest book?

Wendy:  Well, my editor made me take out a semi-colon that I stand by, and will haunt me to my grave because it SOOOOOO belongs, but other than that, I’m happy with how Frosted came out. It tells the story I wanted to tell. I was robbed on that semi-colon, though. If any of you come across two sentences that should be joined by a semi-colon, just know it WAS there.

The Diva:  Who designed the cover of this book?

Wendy:  Some brilliant person at Entangled. I have yet to see an Entangled cover I didn’t like. Some make me blush, but they’re all amazingly well done.

The Diva:  What was the hardest part of writing this book?

Wendy:  The rewriting. Writing has always come easy to me. I can rough draft out a book in less than two weeks…but then that same book will take at least twice that to revise, and that’s even before all the revising I do with various editors. Writing a book is the first step in a long path, and I think it’s the most fun. The least fun is opening up the document with all the comments and corrections from others…but it’s necessary, so I take a deep breath, grab some Mountain Dew, and dig in.

The Diva:  Did you learn anything from writing this book and what was it?

Wendy:  This is my first stand-alone publishing experience. I’ve been in anthologies before. So, the process of publishing has been interesting. As for while I was actually writing the book, I put an enormous amount of research into everything I write…research which strongly resembles running around the internet goofing off. I spent a lot of time reading about the Jack Frost legend. I spent time studying weather across the United States. At one point, I even watched video of the over-size baggage pick-up in the Denver airport. (It’s so cool. If you’re ever in Denver, you should go check it out.) My internet search history is so erratic while I’m writing and revising. I’m probably on all sorts of watch lists.

The Diva:  What were the challenges of writing this book?

Wendy:  The biggest challenge was being true to my conservative nature and upbringing while still telling the story. It’s very difficult to write a romance that you know your very supportive family and friends will read especially when you recognize many of them are ultra-conservative. Skating that line between telling the story hidden in the words and souls of the characters while still publishing something that won’t niggle at my conscience is a fine line for me.

My husband is proud of me, and tells people he knows that I wrote Frosted—a romance. In the acknowledgements at the end, I thank my husband because he made me a part of the greatest love story I’ve known. He’s stuck with me through my OCD getting very bad, our kids both being diagnosed on the Autism spectrum, health issues, miscarriages, and, now, he’s taken the ribbing from his friends that his wife wrote a romance—one that might shock some of our conservative friends. So, his opinion has always been the one that worried me, but he’s been awesome. He gets riled up about less favorable reviews—he checks my ranking on Amazon. It’s sort of adorable. There is no better support system than a significant other who truly wants you to succeed.

At home in the Pacific Northwest, Wendy Sparrow writes for both an adult and young adult crowd. She has two wonderfully quirky kids, a supportive husband, and a perpetually messy house because writing is more fun than cleaning. She enjoys reading with a flashlight under a blanket—the way all the best books should be read—and believes in the Oxford comma, the pursuit of cupcakes, and that every story deserves a happily ever after. Most days she can be found on Twitter where she’ll talk to anyone who talks back, and occasionally just to herself.

At the end of this tour, Wendy will be giving away the beautiful necklace below to one international winner!  You can click on it to see a larger image.