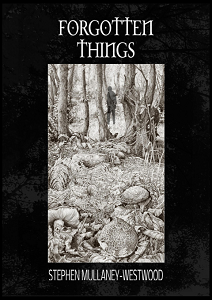 ‘Forgotten Things’ is a novel of nature in contrast; sinister, beautiful, wise and innocent. With an otherworldly twist it explores the importance of influences; of growing up, whilst still looking backwards.

We see through the eyes of one man recounting the bitter sweet memories and adventures of his childhood. His love for the woods… his draw to them… but also his fear.
Similar to a classic ghost story the ‘horror’ is subtle and unnerving, while the ‘fantasy’ is simply a glimpse into another reality.

The little people are our antagonists, spoken of in whispers and presented in their true form; age old beings which transpose boundaries- taken seriously and sitting in mysterious juxtaposition with the secular world.

Fairy tales are one thing…faeries, are another.

Forgotten Things is the debut full-length novel by author Stephen Mullaney-Westwood.  It is a beautiful story woven between the reality that we all know and that inhabited by the creatures of lore that so many of us dismiss.  It is a coming-of-age story that centers around Adam and his friends Martin and Josh.  Adam has just moved to the Cornwall countryside with his parents after his grandfather, whom he barely knows, has had a stroke.  From the very beginning, it is clear that there are issues betwen her mother and his grandfather, issues that no one seems to want to explain to him.  There is an instant connection between himself and his grandfather, one that his mother is not truly happy about.

This is a story with many themes… guilt, friendship, loss, faith in the unseen, trust, and love.  One of  my favorite parts of the novel is the relationship between Adam and his grandfather.  Like his grandfather, Adam is open to the things that flit about the corners of our vision, the things that most adults have cast aside as fanciful notions of childhood.  These are the things that both fascinate him and scare him, the shadows that move in the night, the shadows that move through the trees.  The story is embued with old magic, woven through the lives of the characters in so many unexpected ways.

I apprecciate the way the ideas and concepts of old magic are presented in this novel.  It isn’t the more modern representations of magic that I am used to in young adult and children’s fiction, but magic that is older, more nature-based… the magic of faery lore.  It doesn’t show Disneyfied faeries, but those that are mischievious, even mean.  It celebrates the relationships between humantiy and nature and how it can be both bad and good.  It is a beautiful story with lessons to be learned.

Born in Hertfordshire England Stephen had a hard time adjusting and finding his place in the world. His sensitive and artistic nature outcast him somewhat, and his mental health suffered throughout those teenage and young adult years.
But, ultimately, it was a journey and writing has always accompanied him along the way.
Now more positive, older, and wiser at the grand age of 40 he writes with a potent message which comes from a deep love of the natural world.
To write, and to breathe the words of nature is the place where Stephen belongs, doing something he truly loves.
The faeries and spirits of the woods have always asked to be heard, and Stephen has offered to be their voice.