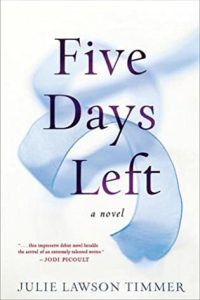 Mara Nichols, a successful lawyer, and devoted wife and adoptive mother has recently been diagnosed with a terminal disease. Scott Coffman, a middle school teacher, has been fostering an eight-year-old boy while the boy’s mother serves a jail sentence.

Scott and Mara both have five days left until they must say good-bye to the ones they love the most. Through their stories, Julie Lawson Timmer explores the individual limits of human endurance, the power of relationships, and that sometimes loving someone means holding on, and sometimes it means letting go.

Words like “wonderful” and phrases like ” I loved it” seem somehow wrong.  Both of those things are true, but there is so much bittersweet emotion that these words seem like the wrong descriptors for this book.

Five Days Left tells two tales, the stories of two people who know each other only in the most anonymous of ways.  In ways that neither of them realize, they are each significant in the other’s life and journey.  Their journey’s are very different, but both are full of heartbreak, love, humanity, hard questions, and sacrifice.

Scott is a middle school teacher who teaches in a rather disadvantaged area, his eyes and heart opened up to the plight of the kids he sees every day.  For the last year, he and his wife have cared for Curtis, the younger brother of a former student whose mother is in jail.  Scott’s heart is huge and he loves Curtis as much as if he was his own son, often to his own detriment with his pregnant wife.  Mara is a once successful attorney, diagnosed with a dehabilitating disease.  Her disease has progressed rapidly and she is unwilling to become a burden to those she loves so much.

This is such a thought-provoking read.  Could I handle letting someone I loved go, even if it were perhaps for the best of that person?  What would I do in the face of my own terminal illness?  Am I making the right choices?  Are those choices for me, or for those I love?  So many questions, so many perspectives.  It was a beautiful book, even as it was often heartbreakingly sad.  I cried all the way through it, an extremely emotional and touching read.

This is not an easy read, but one full of deep emotion and hard questions.  But it is a book that I think is important to consider, to think about, to absorb.  The beauty is often dark and bittersweet, but no less powerful.

Julie Lawson Timmer grew up in Stratford, Ontario. She now lives in Ann Arbor, Michigan with her husband Dan, their four teenage children and two badly-behaved labs. She is a lawyer by day, a writer, mom/stepmom, fledgling CrossFitter and dreadful cook by night. FIVE DAYS LEFT is her first novel.