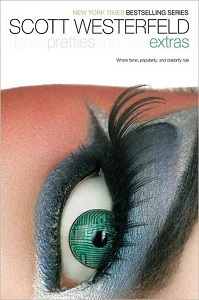 It's a few years after rebel Tally Youngblood took down the uglies/pretties/specials regime. Without those strict roles and rules, the world is in a complete cultural renaissance. "Tech-heads" flaunt their latest gadgets, "kickers" spread gossip and trends, and "surge monkeys" are hooked on extreme plastic surgery. And it's all monitored on a bazillion different cameras. The world is like a gigantic game of "American Idol." Whoever is getting the most buzz gets the most votes. Popularity rules.

As if being fifteen doesn't suck enough, Aya Fuse's rank of 451,369 is so low, she's a total nobody. An extra. But Aya doesn't care; she just wants to lie low with her drone, Moggle. And maybe kick a good story for herself.

Then Aya meets a clique of girls who pull crazy tricks, yet are deeply secretive of it. Aya wants desperately to kick their story, to show everyone how intensely cool the Sly Girls are. But doing so would propel her out of extra-land and into the world of fame, celebrity...and extreme danger. A world she's not prepared for.

Extras is the unexpected final book in the Uglies series, following what was originally touted as a trilogy.  The series is set in a dystopian future in which the ideas of beauty and conformity are the central ideals of the society.  This book takes place a few years after Tally’s story ended and centers on Aya Fuse.  While conformity is less of a “thing” than it once was, beauty still remains as a measure of worth.  But is apparently no longer enough to be beautiful OR to be unique.  In Aya’s city, being famous was the primary goal.  The more famous you are, the higher your “face rank” is and that rank is the currency upon which her society is based.

There are pretty specific cliques within her fame-obsessed world.  There are the tech heads, those that are obsessed with the newest technology.  There are also the surge monkeys, those who are obsessed with the newest and weirdest plastic surgery trends in their quest for physical attractiveness.  And then there are the kickers, those obsessed with tracking down the latest story, the latest gossip, the latest bit of news.  These are posted on feeds, techy versions of our blogs.  Those whose face ranks are at the low end are the extras, the climbers who are obsessed with raising their ranks.  Aya is an extra with a face rank so low that no one knows who she is.  And she is obsessed with changing that.  When she stumbles upon a mysterious group of girls, it changes everything for her.  Most of the book focuses on Aya and her friends and they are all important to the story.  But we also see Tally and her crew again, brought into the story at important moments.  There are a ton of twists and turns in the plot, and quite a few surprises.

In many ways, this is a timely book for this day and age.  It confronts the ideas of beauty and fame both, and turns it on edge in an extreme way that makes you think.  There are also themes of ethics and morality that present themselves in interesting, even if subtle, ways.

There is no question that I loved this series and the thoughts it provoked.  But I can’t help but wish that perhaps it took all of these themes just a bit further.  Like any good dystopian story, the author criticizes current society and focuses on aspects of it that are disturbing in their potential for disaster.  He took those things to extreme levels and based the world of his books on those aspects.  Beauty, conformity, fame… all of these things have the potential for disaster.  And all of these things are questioned.  But in the end, Tally still becomes Pretty and Aya still becomes famous.  True, as characters they have questioned those things and they are aware of the darker side, but they still became the very things that are at the center of controversy.  While both of these girls rebelled against the system, they both benefitted from it and I am not sure that was the intended message.  Of course, I do tend to over think things!