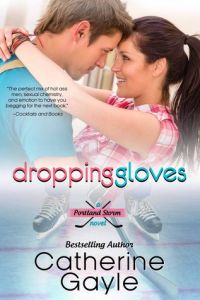 Katie Weber left her heart in Portland to chase a career in Hollywood. Now she has returned to sing the national anthem for the Portland Storm for their annual Hockey Fights Cancer night. Her longtime crush, Jamie Babcock, is hurting just as much as she is. One look in his eyes is all it takes to know that. She's done the Hollywood thing, though, and she's over it, but it might be too late to dig herself out of the hole she’s dug with him.

Jamie’s already done everything humanly possible to let go of Katie, but she keeps coming back, and she keeps crushing him all over again every time she leaves. His heart has been trampled on more than enough already. At some point, he has to draw the line. Doesn't he? Only, when it's Katie, he's not sure that's even possible. She's in Portland again right now, but he can’t be sure for how long.

Katie knows she has a fight on her hands, in more ways than one, if she’s going to convince Jamie she deserves another chance, but she’s willing to drop her gloves this time. Because in the game of love, all bets are off.

Now anyone who reads my reviews knows that I am an avid fan girl of Catherine Gayle’s Portland Storm books.  I absolutely love hockey, so I appreciate a good book written around that theme.  But Catherine’s books are so  much more than hockey romance.  They are intensely emotional stories about real people.  There is none of the “celebrity diva” attitude with the players, being down to earth people with real issues, real struggles.  There are times when I feel like Catherine is channeling my life with her stories because they often, in some way, mirror things that are going on in my own life and Dropping Gloves is no different.

One of my favorite things about this series is the cast of characters that appears in each book, whether as the main characters in their own story or as supporting characters in another’s.  Catherine makes characters that we come to love and care about and we don’t lose them or their stories as we move to a new book.  Some of them have been featured in their own books and we get little updates, while others may have yet to have their own books and we get glimpses of future stories.  It’s an exciting way to create a world and I love it!

From the first time we met Jamie “Babs” Babcock, I have been waiting for his story and now we have it!  He has been one of my favorite characters from day one, kind and considerate and fiercely loyal.  I loved the way he fit in with the other players and with their families.  I love a man who genuinely loves kids, something that is a big part of his character.  And then he fell for Katie Weber when her father was his teammate.  And no matter what happened to her, he was there for her.  But then life brought new opportunities to Katie and she left him before even truly giving them a chance together.  That was heartbreaking and it has been talked abut from time to time in subsequent books, building the anticipation for Dropping Gloves.

Hollywood hasn’t been what Katie thought it would be and her career hasn’t gone the way she wants.  She just doesn’t want to keep living the life her agent has been pushing her into.  So when Katie comes home from Hollywood to sing the national anthem for the team’s “Hockey Fights Cancer” night, she is feeling at odds within her own life.  Changes need to be made and she knows it.

This is a story of struggle and change and acceptance.  For Katie, it’s about changing her life and being true to herself.  She has done some things she regrets and she is having a hard time forgiving herself for her own part in her victimization.  That feeling is something that I think all of us can relate to at some point or another.  She realizes just how much she cares about Jamie, but her inability to forgive herself makes her feel as if she just doesn’t deserve someone as wonderful as him.  But, as if all of this wasn’t enough, a personal tragedy in her life turns everything on edge.  And it turns me into an emotional mess!

For Jamie, it begins as a struggle to accept that his time with Katie is over and that he needs to move on.  But then he sees her again and the struggle becomes even harder for him.  He’s hurt and he doesn’t entirely trust her with his heart, but he is still drawn to her and slowly those barriers come down.  I love that his character isn’t scared off by dark times.  Instead, he embraces them and makes himself her rock when she needs it.

This is a love story that is beautiful, but it isn’t just the romantic love that is beautiful.  It is the love of family and friends, too.  It is emotional and intense and impossible to put down!

« The Truth About Jack
The Kill Order »