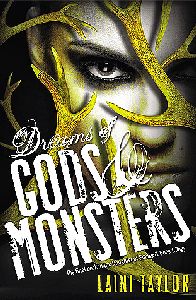 Dreams of Gods & Monsters by Laini Taylor
Series: Daughter of Smoke & Bone #3
Published by Little, Brown and Company on 2014-04-15
Genres: fantasy, romance
Pages: 618
Source: library
Format: Hardcover
Buy/Shelve it: Amazon | B&N | Kobo | BookBub
FTC Disclosure: I received this book for free from the library in exchange for an honest review. This does not affect my opinion of the book or the content of my review.

[color-box]Two worlds are poised on the brink of a vicious war. By way of a staggering deception, Karou has taken control of the chimaera's rebellion and is intent on steering its course away from dead-end vengeance. The future rests on her.

When the brutal angel emperor brings his army to the human world, Karou and Akiva are finally reunited - not in love, but in a tentative alliance against their common enemy. It is a twisted version of their long-ago dream, and they begin to hope that it might forge a way forward for their people. And, perhaps, for themselves.

But with even bigger threats on the horizon, are Karou and Akiva strong enough to stand among the gods and monsters?

The New York Times bestselling Daughter of Smoke & Bone trilogy comes to a stunning conclusion as - from the streets of Rome to the caves of the Kirin and beyond - humans, chimaera, and seraphim strive, love, and die in an epic theater that transcends good and evil, right and wrong, friend and enemy.[/color-box]

Dreams of God & Monsters is the last of the Daughter of Smoke & Bone trilogy and I am so sad to see it end.  This has been a wild ride with a beautiful cast of characters and a thought-provoking story that held me from beginning to end.  Despite the length of these books, they were all fairly quick reads because I just couldn’t put them down.

This book was full of adventure and intrigue, suspense and twists, and I loved it!  The mythology of this series takes humans, demons, and angels and changes your perception of them.  What does it mean to be good or evil?  How does one person or thing become evil?  Are those thought to be evil truly bad, or is it just one’s perspective?  These are all questions that this book, and the series, makes you ask yourself.

I felt like this book was the most emotional of the series.  It tore my heart to shreds more than once, and built it right back up.  The imagery and the characters are so vivid that it was impossible not to put myself in the middle of the story with them, feeling their pain, their angst, their joy, their sadness.  So delicious!