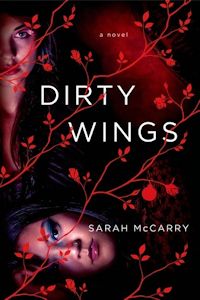 A gorgeous retelling of the Persephone myth, Sarah McCarry brings us the story of Cass and Maia--the mothers from All Our Pretty Songs--and how their fates became intertwined.

Maia is a teenage piano prodigy and dutiful daughter, imprisoned in the oppressive silence of her adoptive parents' house like a princess in an ivory tower. Cass is a street rat, witch, and runaway, scraping by with her wits and her knack for a five-fingered discount. When a chance encounter brings the two girls together, an unlikely friendship blossoms that will soon change the course of both their lives. Cass springs Maia from the jail of the only world she's ever known, and Maia's only too happy to make a break for it. But Cass didn't reckon on Jason, the hypnotic blue-eyed rocker who'd capture Maia's heart as soon as Cass set her free--and Cass isn't the only one who's noticed Maia's extraordinary gifts. Is Cass strong enough to battle the ancient evil she's unwittingly awakened--or has she walked into a trap that will destroy everything she cares about? In this time, like in any time, love is a dangerous game.

The first book in this series, All Our Pretty Songs, was a book that appealed to me for its uniqueness.  It was a weird and often disturbing read and those flavors extended to this book, a prequel of  sorts.  It answered so many questions, even questions that I didn’t even always  know that I had!

This is the story of Cass and Maia, the mothers from the first book.  In AOPS, there was a lot of wondering about why these two were the way the were, what made them into the people that they were.  These girls come from such different worlds.  One came from a privileged life with all the opportunities in the world.  The other came from a disadvantaged home, with little of even the most basics of things.  Against all odds, they bond, even if that bond is often dark and always codependent.

The story goes back and forth from the beginning of their friendship to the present time in that book, all of it before the timing of the second book.  That back and forth really illuminates the changes the girls go through, the way their lives transform over time.  Like the first book, the story is dark and disturbing, painful and raw.

Although this is part of a trilogy, it is an odd trilogy.  The first book is set considerably into the future from the second.  There is still a gap in time between the time of the second and that of the first.  I am hoping that the next book will cover that time because I think there is still a lot of story to tell between Cass and Maia.

I really like this story.  I embraces its uniqueness, its weirdness.  It is different and fresh!

« All Our Pretty Songs
The Purest of the Breed »