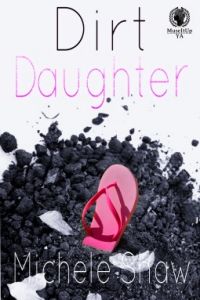 In Dirt Daughter, seventeen-year-old Elena Black has concealed the secret to her childhood friend’s murder for eight years. With the possibility of a college scholarship looming, she plans to keep that secret and flee her dysfunctional home; one with a drug-addicted mother, a stepsister she just met, and a bitter, abusive uncle. But, when a detective reopens the cold case and a friend sets her up on a date with the new boy at school, the past and present collide, threatening Elena’s future plans…and her life.

Dirt Daughter tells the rather tragic story of Elena Black.  She has known a life of tragedy and loss, betrayal and neglect.  When she was young, she lost her best friend Lizzy in a terrible accident, her body never found.  Soon after, she lost her father when he died after a fall from a bridge.  These events forever changed her life in so many ways.  After her father’s death, her mother became hopelessly addicted to drugs and took up with her former brother-in-law, Elena’s uncle.  He was a bitter, abusive, addicted man who took his angst out on whomever was closest.  Elena was left to essentially raise herself and her young brother.  Now, years later, the investigation into Lizzy’s death has been reopened and Elena is forced to face the horrible circumstances once again.

Elena is a girl who posses great strength in the face of a horrible situation.  Instead of allowing herself and her brother to fall victim to their mother’s inability to take care of them, she stepped up and has done those things.  She has done well in school, despite all odds, and ensured her brother was safe and cared for.  She has spent most of her life focused on survival and, almost against her wishes, she falls for a new boy at school.  He is different from everyone she has known, kind and gentle and compassionate.  I loved the romance that brewed between them.  It was beautiful and clean, and the purest thing in her life aside from her love of her brother.  I also loved Angie, Elena’s stepsister who unexpectedly showed up, surprising everyone with her mere existence.  She had clearly not had the best time of it either, turning more than a big rough around the edges.  But there were moments in which it was clear that she was all bluff, with a true, caring heart.  Angie and Elena, no matter how different they were on the surface, were both girls who longed for a true family.

I loved how raw and gritty the story of Dirt Daughter was, a realistic portrayal of what can go on behind closed doors.  The author didn’t shy away from tough topics, but shows them in a way that rings true.  While often uncomfortable to read and to think about, the neglect and abuse was well-written and authentic.  The drug abuse, the selfish choices, the neglect… none of these things made Elena’s mother a particularly sympathetic character, yet by the end of the novel, there was a sense of, if not sympathy, then compassion for her and her history.

Probably the most interesting part of the book was the psychological undertones, seeing how the things that Elena went through affected her.  It affected her views on life, love, friendship, trust, etc. and it added so much depth to her character as she grew and changed over the course of the novel.

My only criticism would be with the mystery aspects to the story.  By the time I was halfway through the novel, I was pretty sure I knew whodunit, although the reasons behind it were not what I had surmised.  But for me, the true draw of the story was Elena’s character.

YA Author, short story writer, poet. Look for my novels, Scatter-October 7, 2014 and Dirt Daughter- June 9, 2015 from Muse It Up Publishing.