Lisa lives for her daughter Ava, her job, and her best friend Marilyn, but when a handsome client shows an interest in her, Lisa starts daydreaming about sharing her life with him too. Maybe she’s ready now. Maybe she can trust again. Maybe it's time to let her terrifying secret past go. Then her daughter rescues a boy from drowning and their pictures are all over the news for everyone to see. Lisa's world explodes, and she finds everything she has built threatened. Not knowing whom she can trust, it's up to her to face her past to save what she holds dear.

This is my second book by this author, another psychological, although this one didn’t have the semi-paranormal ending that Behind Her Eyes did.

The story is told primarily through the alternating perspectives of Lisa, Ava, and Marilyn, all three of whom have secrets of their own. Each of their chapters reveals a little more about their character, about their secrets. The first third of the book is fairly slow-paced, but that’s not a negative thing. It allows the reader to get to know the three narrators, and to learn their secrets. Then the action picks up, and we are taken on a wild ride.

Cross Her Heart is as much a character-driven story as it is plot driven. At first, Lisa seems to be another helicopter mother, Ava her rebeliious daughter. Marilyn seems to have the idyllic life, the perfect marriage. But as the veil is lifted away, the reader discovers so much more to them.

I loved the plot just as much. The secrets, the twists and turns, the way it all came together. It was riveting. But there were some dark moments, moments that tugged at my soul. Yet those moments were the ones that allowed me, as a reader, to really feel for the characters. I couldn’t put it down!

This is a thriller I highly recommend.

possible spoiler
Anyone who has delved into the world of true crime might see some parallels to some real events. The story has shades of Mary Bell, the English girl who murdered two boys when she was just a child. It also has shades of the Pauline Parker-Juliet Hulme murder.

Sarah Pinborough is a New York Times bestselling and Sunday Times Number one and Internationally bestselling author who is published in over 30 territories worldwide. Having published more than 25 novels across various genres, her recent books include Behind Her Eyes, now a smash hit Netflix limited series, Dead To Her, now in development with Amazon Studios, and 13 Minutes and The Death House in development with Compelling Pictures. Sarah lives in the historic town of Stony Stratford, the home of the Cock and Bull story, with her dog Ted 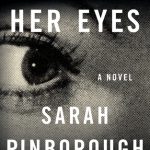 « A Spindle Splintered
The Lies We Told »