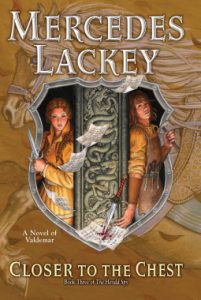 Herald Mags, the King of Valdemar’s Herald Spy, has been developing a clandestine network of young informants who operate not only on the streets of the capital city of Haven, but also in the Great Halls and kitchens of the wealthy and highborn. In his own established alternate personas, Mags observes the Court and the alleys alike, quietly gathering information to keep Haven and the Kingdom safe.His wife Amily is growing into her position as the King’s Own Herald, though she is irritated to encounter many who still consider her father, Herald Nikolas, to be the real King’s Own. Nonetheless, she finds it increasingly useful to be underestimated, for there are dark things stirring in the shadows of Haven and up on the Hill. Someone has discovered many secrets of the women of the Court and the Collegia— and is using those secrets to terrorize and bully them. Someone is targeting the religious houses of women, too, leaving behind destruction and obscene letters.But who? Someone at the Court? A disgruntled Palace servant? One of the members of the Collegia? Someone in the patriarchal sect of the god Sethor? Could the villain be a woman? And what is this person hoping to achieve? It isn’t blackmail, for the letters demand nothing; the aim seems to be the victims’ panic and despair. But why?Mags and Amily take steps to minimize the damage while using both magic and wits to find the evildoer. But just as they appear to be on the verge of success, the letter writer tires of terror and is now out for blood.Mags and Amily will have to track down someone who leaves few clues behind. They must thwart whatever plans have been set in motion, and quickly—before terror turns to murder.

Closer to the Chest is the third and final book in The Herald-Spy trilogy, part of the Valdemar saga. I love Mags as a character; he’s one of my favorites in the entire saga of books.

In the other two books, the main conflict/intrigue was preemptive, stopping something before it could happen. The central conflict/intrigue of this book was different. In this one, they became embroiled in something already in progress. An unknown group was coming after the women of Haven, a group with a clear grudge against any woman who did not live their life in what that group believed was the proper way.

While I would have enjoyed a little more intrigue, as I like to be kept guessing, I loved the story of Mags and Amily as they sussed out the bad guys. What I appreciated the most was the message of the storyline, the place of women in the world. Because that was what was at the heart of the story… the place of women, the rights of women, bullying, victim-shaming. It’s a book, although released only five years ago, seems incredibly poignant in late of the times we live in.

« Our First and Last Tour
The Last Thing He Told Me »