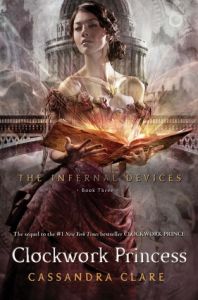 A net of shadows begins to tighten around the Shadowhunters of the London Institute. Mortmain plans to use his Infernal Devices, an army of pitiless automatons, to destroy the Shadowhunters. He needs only one last item to complete his plan: he needs Tessa Gray.

Charlotte Branwell, head of the London Institute, is desperate to find Mortmain before he strikes. But when Mortmain abducts Tessa, the boys who lay equal claim to her heart, Jem and Will, will do anything to save her. For though Tessa and Jem are now engaged, Will is as much in love with her as ever.

As those who love Tessa rally to rescue her from Mortmain’s clutches, Tessa realizes that the only person who can save her is herself. But can a single girl, even one who can command the power of angels, face down an entire army?

Danger and betrayal, secrets and enchantment, and the tangled threads of love and loss intertwine as the Shadowhunters are pushed to the very brink of destruction in the breathtaking conclusion to the Infernal Devices trilogy.

Clockwork Princess is the final book in the Infernal Devices trilogy, the prequel series to the Mortal Instruments series.  It picked up right at the end of Clockwork Prince.  It was a beautiful end to a great series, with happy moments as well as sad.

The action was just as fierce in this book with some truly epic battle scenes.  Throughout this series, I found Mortmain’s creatures horrifying and they were even more so in this book.  The combination of steampunk elements and magic was fantastic, totally embodied in these creations.

The romance in this installment was at times beautiful and at other times heart wrenching.  The love between Jem and Tessa is beautiful, while Will’s heart is being broken.  But that love is not the only love in this book, either.  We see it growing between some of the other couples in ways that are just heart warming.

The characters are what make this series so wonderful for me, both the good guys and the bad.  Even those that we are supposed to hate were often surprising, showing just enough humanity to make the reader empathize with them.  It may not excuse their behavior, but it gave a whole other level to their characters.  The supporting characters are not just background props to the protagonists, but characters with their own stories to tell.  I love how their stories, while not always in the forefront, were woven into the whole.  Magnus remains one of my favorites in the series, as he was in the Mortal Instruments.  He’s so different as a person in this series, but in many ways, you can see the person he will become.  Jem, Tess, and Will… three distinct characters who in many ways are one.  In very real ways, they are who they are because of one another.  It’s a love triangle like none other, with no true jealously or hate.  Just love and loyalty and a deep selfless desire to see the others happy, even at the cost of their own.

One of the things I love most about these books is that we don’t always get what we want with the characters.  It isn’t all perfectly wrapped up HEAs, but instead reflect real life in that sometimes life just doesn’t work out as planned and that there are obstacles in life.  It is tragic and heart breaking, yes, but I like that the author doesn’t shy away from that.

Fantastic series that adds so much to the story told in the Mortal Instruments!