I’m Nico “Chains” Trinidad—Tail-Gunner for the Ankeny RBMC. I'm not a good man, but I’m loyal to the core. I won’t hesitate to protect my club.

I wanted Jasmine more than my next breath. Just one night, and she was a fire in my blood I couldn’t extinguish. It didn’t matter that she was forbidden.

When my chapter stumbled into the middle of a sinister organization, it put us all in their crosshairs. Chaos ensued, and she became a casualty.

Damaged and scarred, she used me, and I let her. My need to possess her overrode common sense. Until we got caught and I was shipped off to keep her brother from carving out my heart.

Months later, I came back to secrets and lies that blew up in our face. Now, I need to find a way to save her from one of our deadliest enemies or lose everything.

I’m going to prove I’m the right man for her and unleash the hounds of hell on them—even if it kills me.

Chains is such an emotional read! There were times when I just wanted to cry, and other times I didn’t know who I wanted to yell at. Nico and Jasmine were great main characters, both of them having been so much. If there were ever two characters that deserved a break in life, it was these two. The obstacles that came between them often seemed almost insurmountable, and it really kept me hooked into the story.

Both characters were the epitome of tragic heroes. Nico is blessed (or cursed) with the ability to touch someone and then be able to see into their minds. It’s an invasive power for all involved, so emotionally overwhelming. He hates it, and distances himself from most people in an attempt to avoid it. Jasmine too has had a rough go of it, going through something that has left her feeling broken.

So much emotion, lots of twists and turns, and a lot of suspense along with the love story! I highly recommend this book… and the series. 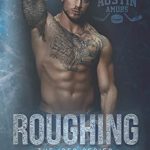