Who doesn’t love surprises?  The people behind Brazen Books sure do – and they just couldn’t wait a whole month before putting out another book for their readers. Surprise! 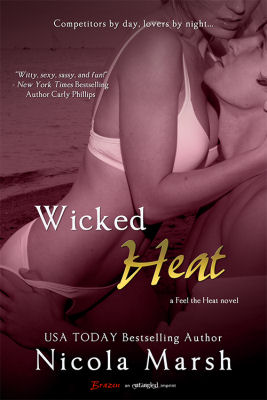 A little blurb of Wicked Heat…

Competitors by day, lovers by night…

Allegra Wilks has had the worst month of her personal and professional life. To save her company, she must go on her would-be honeymoon and land the luxury eco-island resort’s lucrative advertising account. But when a lingerie mishap leads her into the arms of a wickedly distracting Australian, Allegra’s tempted to skip the trip and explore the most sensual kiss she’s ever experienced. Too bad their chance encounter at the airport is just that.

Having recently lost his company to his former best friend’s shady business tactics, Jett Halcott is headed to a South Pacific resort to secure an advertising account that will resurrect his reputation and career. Realizing the tantalizing Allegra Wilks is on his flight, Jett envisions a week filled with business and pleasure. But Jett doesn’t know Allegra’s fighting for the same account, or that there’s more at stake than his heart.

An excerpt of Wicked Heat…

“You should do that more often,” he said, reaching out to trace her bottom lip with his fingertip. “You’re beautiful, but when you smile? Wow.”

Uncomfortable with his overt compliments, Allegra sat there and let a guy she’d just met touch her lips with a slow, sensual caress. His fingertip traced her bottom lip in a butterfly-soft sweep that left her breathless.

Their eyes locked as he lowered his hand, and what she saw made her wish she could ditch Palm Bay and travel to Australia.

Blatant lust. Strong. Sexy. Seductive. His eyes deepened to an incredible green that matched a favorite jade pendant she wore often. He wanted her, and in this crazy moment, the feeling was entirely mutual.

He raised his beer to his lips and took a long swig, his heat-filled stare never leaving hers.

Damn, she had no idea what to do in this situation. Make a joke to diffuse the tension? Acknowledge it? Flirt?

She hated feeling out of control, had instigated steps her entire life to avoid it. Yet in a loaded thirty seconds, Jett had made her damp with just one look and made her flounder.

“Is the blatant charm an Aussie thing or is it just you?”

Thankfully, he blinked, and broke the scorching stare that made her want to grab a napkin off the bar and fan herself. “It’s me.” He leaned in close. “Time you fessed up.”

Yikes. Was her reaction to him that easy to read?

His lips almost brushed her ear. “You’re battling an incredible urge to drag me into the nearest janitor’s closet and ravish me.”

She laughed at his outrageousness. “Sorry. I don’t do sex in cleaning closets. Too many hazardous chemicals.”

“Yeah, those pheromones can be killer.”

She loved his quick wit and for the second time in as many minutes, wished she’d met him at a different place, different time.

“Pity.” He reverted to a smoldering stare that had her wishing she’d ordered a vodka shot chaser. “Sex in confined spaces can be fun.”

“I’ll take your word for it.” Heat crept into her cheeks and she signaled the waiter for a glass of water. To douse herself with.

“Not the answer I was hoping for,” he said, shifting his barstool closer so their thighs brushed. “Would’ve been better if you’d said, ‘Sounds good, Jett, let’s go try.’”

She cleared her throat and gratefully accepted the water from the waiter, drinking it all and wishing she could run the cool beaded exterior across her forehead. “How did we get onto this crazy topic?”

“Started with you wanting to ravish me.” He clinked his beer bottle to her empty glass. “Seriously. There’s no need to hold back. I can take whatever you want to dish out.”