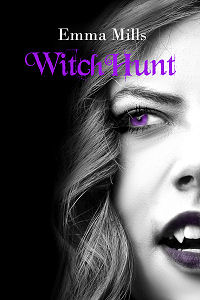 ‘I know it’s selfish, but I don’t want you to go,’ Daniel said, a couple of minutes later.

As the Christmas season is ripped apart by the news that Jess’ old friend Alex has been turned into a vicious killer, festivities are dropped, Jess returns to England and the hunt begins. But Alex isn’t the only one being hunted, for Mary has found a way to extinguish the entire bloodline of Malden witches, and it is Jess’s book of shadows that’s the key. As things hot up, Jess finds she must leave Daniel and the safety of Manchester in a final hunt for her nemesis, Mary. In a fight-off that only one of them can survive, loved ones will fall… daemons will rise… but who will survive?

I absolutely love this series!  The characters are so real to the reader that you are swept right along with them on their adventures!  I love that there is just as much dark as there is light in these books, adding to the reality of the story.  There is no fluffing over the hard parts and, as a reader, I appreciate that authenticity.  It’s what makes a paranormal fantasy wonderful, that air of “it just may be possible” about those things that exist outside our own world.

There was so much suspense in this installment that I couldn’t stop turning the pages, even when I had other things to do.  I just had to know what was going to happen.  There were twists and there were turns.  The twists had turns and the turns had twists.  One moment I would be scared, the next on the verge of tears.  And then I’d be giggling.  Daniel, Jess, Eve, and Brittany are four very different characters and they each resonated with me.  Alex was the most tragic character in this one.  Her story was one that tugged on my heart strings.  I even found myself feeling for Saffy, the rather bitchy cousin of Jess whom I thorough disliked before this book!

I am sad to have this series come to an end.  I feel like I know these characters and I have come to love them.  The author says that there may be more shorter stories in the future.  But, at least for now, it is over.