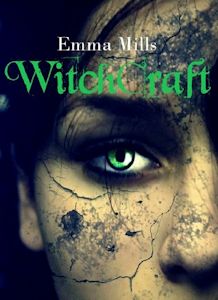 Jess is no ordinary vampire. Protected by the Manchester vampire clan, and initiated by her family’s east coast American coven, she is sought after by every dark witch and warring vampire faction. Jess must fight if she wants to keep hold of her friends, her sanity and finally her existence.
As the dead bodies of human girls begin to stack up, and her recently accepted vampire boyfriend, Daniel, finds himself in prison, Jess goes on a crazy, forbidden trip to London, racing against time to save an old friend and solve the mystery behind Daniel’s incarceration. In battling new enemies and finding new friends, Jess’s confidence finds room to grow, but who will she lose along the way?

Witchcraft is the newest book in the fantastic Witchblood series by author Emma Mills.  As I have said many times on this blog, what makes a book great for me is one that hooks me emotionally.  Love or hate, sadness or happiness, anger or laughter.  Those are the things that pull me in and keep me there.  Emma Mills knows how to do just that.  When I went into this book, after reading the first, I was firmly Team Daniel.  But by the end of this one, I am now Team Luke, thanks to the emotionally charged story of this novel!  It was a bit darker than the first, taking me up, down, to the left, and to the right, and I loved every minute of it.

The story between Jess and Daniel was at times as wonderfully romantic and sweet as in the first book.  But eventually I got so involved with their story that Daniel and his behavior began to to annoy me as much as it did Jess!  And the interference of Eva, Daniel’s maker, had me wondering just where that relationship was going.  Luke, who made me want to slap him in the last book with his narrowmindedness, turned around for me.  What I like best about Emma’s writing is that it is real, even when dealing with fantasy beings.  While Luke did turn around, it wasn’t complete.  He wasn’t perfect, but flawed.  The same with Daniel, even when he annoyed me.  The characters were real and their fantastical side was just a part of them, rather than being all that they were.  That made the entire story much more engrossing!

If you haven’t read Witchblood, read that first and then IMMEDIATELY begin Witchcraft!  :)